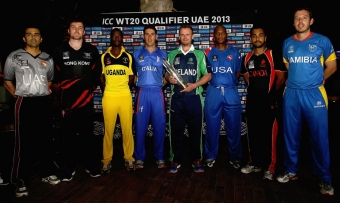 One of the biggest tournaments in the ICC’s Associate and Affiliate Members’ (AM) calendars gets underway tomorrow when the ICC World Twenty20 Qualifier UAE 2013 (WT20Q) commences. Sixteen teams will compete for the six available places in the tournament proper in Bangladesh.

A total of 72 matches will be played at six venues across Abu Dhabi, Dubai and Sharjah from 15 to 30 November, with all matches free to watch for spectators. The tournament will see 16 sides, split into two groups of eight, compete for six available spots in the ICC World Twenty20 2014 in Bangladesh. The sides that top the two groups at the conclusion of the group stages will automatically qualify for Bangladesh 2014.

The sides that finish second and third in each of the two groups will play cross-over matches, with the two winners also progressing to the ICC World Twenty20 Bangladesh 2014.

The sides that finish fourth and fifth in each of the two groups will also play cross-over matches, with the winners of these two matches then playing the losers of the second/third cross-over fixtures; the victors of these matches will then complete the lineup of qualifiers to the ICC World Twenty20 Bangladesh 2014.

The losers of the semi-finals will then play each other in the third/fourth play-off, while the final two qualifying sides will play a fifth/sixth play-off. The complete tournament schedule can be found here.

The final finishing positions of the teams in this event will determine which group each team will go into for the first round of the ICC World Twenty20 Bangladesh 2014, alongside Bangladesh and Zimbabwe.

Afghanistan, Canada, Ireland, The Netherlands, Namibia and Scotland earned direct qualification into the WT20Q 2013 by virtue of finishing in the top six of the previous event, held in the UAE in March 2012. Joining those six sides with automatic qualification is host, the UAE, while the remaining nine sides have progressed through 11 regional qualifying tournaments. No less than 72 AM countries featured in these regional tournaments.

The 16 sides have been divided into two groups of eight, with defending champion and top seed Ireland topping Group A and number-two seed Afghanistan heading Group B. Other sides in Group A are Namibia, Canada, Uganda, USA, Italy, Hong Kong and the UAE, while Group B also includes The Netherlands, Scotland, Kenya, Bermuda, Denmark, Nepal and Papua New Guinea.

Another key feature of the tournament will be the presence of a member of the Emirates Elite Panel of ICC Umpires, Steve Davis, who is one of the 16 umpires who will be officiating at the tournament.

He added: “We last worked together in Malaysia in 2011during an ICC World Cricket League tournament and it will be interesting to see how some of them have progressed. Our aim is to keep providing these umpires with access to updated training material, maintain a strong linkage to umpiring at the elite level and continue to support their development.

“This tournament is just as important to the umpires as it is to the players and teams. I’m really proud to be just one member of that umpiring team.”

The match official appointments can be viewed here on the ICC website.

A perfect icing on the cake to what will undoubtedly be an event to remember will be the broadcast coverage of 16 matches that will be live-streamed on the ICC’s official website, www.icc-cricket.com, while the last four days of the tournament will be broadcast round the globe by the ICC’s broadcast partner, STAR Sports and its licensees. Among the eight live matches that will be broadcast from the Zayed Cricket Stadium are the semi-finals and final of the tournament (see Notes to Editors).

The coverage of the WT20Q UAE 2013 follows the recent live-streaming of the ICC Women’s World Twenty20 Qualifier Ireland 2013, and eighteen ICC World Cricket League Championship fixtures from around the globe, including Afghanistan’s historic qualification to the ICC Cricket World Cup 2015.

This continues to highlight the ICC’s efforts to showcase cricket played by countries outside of the traditional Test playing countries, and, aligned with the ICC’s Strategic Plan, is an important step in promoting cricket to become a bigger, better global game.

The ICC World Twenty20 Qualifier has grown in stature since it was first held in Belfast, Ireland, in August 2008. That event comprised the then top six Associate Members – Bermuda, Canada, Ireland, Kenya, The Netherlands and Scotland.

Ireland and The Netherlands shared the trophy when the final was washed out without a ball being bowled. The two sides, along with Scotland - which subsequently replaced Zimbabwe - qualified for the ICC World Twenty20 2009, which was staged in England. Pakistan won the tournament, beating Sri Lanka in the final.

The UAE hosted the second edition of the tournament in February 2010, which was contested by eight teams - the six sides having T20I status – Afghanistan, Canada, Ireland, Kenya, The Netherlands and Scotland – as well as the host, UAE, and the USA, which was specially invited by the ICC.

After 17 matches over six days at two venues in Dubai and Abu Dhabi, Afghanistan and Ireland reached the final and qualified for the ICC World Twenty20 2010, which was staged in the West Indies and won by England. Afghanistan won the qualifying tournament when it defeated Ireland by eight wickets.