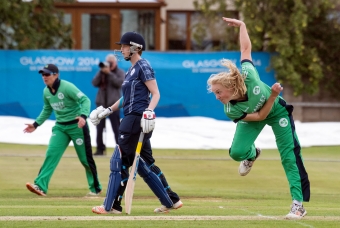 A big summer ahead for the Ireland Women's team

Cricket Ireland today announced an international T20 double-header featuring the Ireland Women’s and Men’s teams on 29 June 2018 in Dublin, as well as increased investment to further support the growth of the women’s game.

Also announced today were the squads and playing schedule for Ireland Women for the 2018 season - which features mouth-watering clashes against New Zealand and Bangladesh, before the squad heads to the Netherlands for the World T20 Qualifier tournament in July.

“The women’s senior team have a big year ahead, and we’re delighted to bring fans that on 29 June you’ll be able to enjoy two high-quality international T20 matches with the women’s team taking on Bangladesh from 11am, followed by the men’s team facing India from 4pm,” said Richard Holdsworth, Performance Director, Cricket Ireland.

“Not only does this give fans a great cricket experience, but gives a real boost in exposure for our women. The team are currently ranked 10th in the world and are playing some great cricket at the moment, so it should be an occasion to savour.”

The Board of Cricket Ireland has been keen to ensure that improvements are progressively rolled out to support the squad as playing and training demands grow, and recently approved an almost 50% increase in investment relating to the women’s game.

“These funds allow us to put player agreements in place for the senior squad – an important step in increasing player availability by providing for loss of earnings throughout the summer. We are additionally able to improve coaching staff hours, increase overseas player development opportunities, and facilitate greater access to support services such as physio and medical, strength and conditioning, psychology and nutrition education,” said Holdsworth.

“However, we recognise that all levels of the women’s game need attention, particularly with regard to succession planning and talent development, so I’m delighted with the improvements concurrently being made to our women’s academy under the leadership of national women’s Head Coach Aaron Hamilton.”

Aaron Hamilton, Head Coach of the Ireland Women’s team since 2015, has been overseeing a period of transition for the women’s team and cited the recent Zimbabwean tour as an opportunity to give a few younger players some international experience.

“We took a squad to Zimbabwe that was a balance of experience and youth. While we didn’t get the best weather overall, with a few games rained off, the tour was an opportunity to provide some of the youngsters international game time. Players like Anna Kerrison, Cara Murray and Vanessa Kelada all made their international debuts.”

“While each of our new players adapted well, I was particularly impressed by Cara, who displayed great control for such a young leg-spinner.”

“We’ve also been bolstered by several of the women’s team getting some top-level cricket in Australia over the winter. Kim Garth and Isobel Joyce have both starred in the Women’s Big Bash League, while Mary Waldron and Ciara Metcalfe had stints at top clubs in Adelaide and Brisbane respectively, thanks to the support of Devenish Nutrition.”

“Looking to the year ahead, we have also now finalised the Women’s Performance Squad and Shapoorji Pallonji Academy Squad for 2018. These are essentially the two pools of players that will not only make up our playing team this year, but are the future of women’s cricket.”

“It’s a big year for women’s cricket in Ireland, and one which the women’s senior squad are relishing. We’re currently ranked the 10th best team in the world, and looking forward to a big few months ahead playing against some top teams.”

The first international opponent will be New Zealand Women, the world’s 3rd ranked team, in June 2018.

“The White Ferns (the New Zealand Women’s team) are fresh from a 3-0 series victory over West Indies this month, so are in ominous form. It will be great to welcome them here to Ireland, and I very much look forward to the battle with my opposite number, Suzie Bates, who is not only an experienced international captain, but ranked the world’s fourth best batter,” said Delany.

“The Bangladeshis will bring a different challenge and are more evenly matched in terms of experience and firepower - however we will be seeking revenge after their victory over us last time we met last year at the ICC Women’s World Cup Qualifier in Sri Lanka!” said Delany.

“Of course, no international sporting team can compete at the highest levels without support of sponsors, and we would like to acknowledge the ongoing support of Hanley Energy who are committed to ensuring women’s cricket continues to be a force in Irish sport.”

Clive Gilmore, CEO and Co-Founder of Hanley Energy, said: “Women’s sport is on the up in Ireland, and women’s cricket is no exception. In sport, as in business, you need to develop good partnerships to succeed and Hanley Energy’s partnership with Cricket Ireland is leading to success on the field and growth off it. We wish the team well for a big season ahead.”

* If Ireland progress to that stage of the competition.