India run chase too much for Ireland at WT20 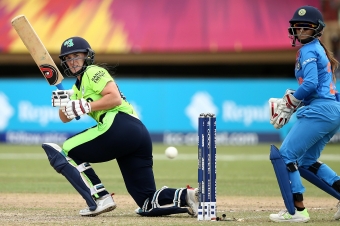 GEORGETOWN - Ireland Women’s team have lost their third Group stage encounter with the in-form Indian side, despite a good bowling performance that pegged the Indian batters back during the latter overs.

While Ireland and India have met on 12 occasions in the one-day format, but this was the very first clash between the sides in T20 format.

Arriving at the ground for an early start to the day, the two teams were met by cloud and rain, which threatened to delay the start of play. However, attentive groundstaff and a venue known for its fast-drying outfield meant that play got underway just a few minutes late with no loss of overs.

Ireland’s captain Laura Delany won the toss and elected to bowl. Buoyed by a small but vocal local support, India got off to a solid start with openers Mithali Raj (51 runs from 56 balls) and Smriti Mandhana (33 runs from 29 balls) put together an opening stand of 67 from 9.5 overs, until all-rounder Kim Garth struck with a good-length ball that held its line and knocked over Mandhana’s leg stump.

Jemimah Rodrigues (18 runs from 11 balls) threatened to accelerate the scoring until captain Delany and keeper Mary Waldron conspired to induce Rodrigues out of her crease, with the quick-hands of Waldron completing the stumping.

At 107-2 in the 15th over, India looked like they had the wickets in hand - which included Harmanpreet Kaur - in order to mount a big total, however Ireland’s bowlers took regular wickets over the remaining five overs and restrained the batting side to a final total of 145-6 from their 20 overs.

Garth was the pick of the bowlers, claiming 2-22 from her four overs, while Lucy O’Reilly and Eimear Richardson joined Delany with one wicket apiece.

Set 146 to win, Ireland’s openers Clare Shillington (23 from 23) and Gaby Lewis (9 from 19) started in a confident mood and made it to the last over of the powerplay without losing a wicket. Shillington once more smashed several boundaries in her innings, but on 23 she advanced down the wicket to spinner Poonam Yadav (1-14), but missed the wide spinning delivery and the Indian wicketkeeper Taniya Bhatia completed the stumping.

During her innings, Shillington became the first Irish woman to surpass 1000 T20I runs, and fourth Irish player overall. With her impending retirement at the end of this tournament after a 21-year career, Ireland will need to fill the void left by the Belfast-born opener who has been an ever-present mainstay since her debut against South Africa in 1997.

Isobel Joyce (33 from 38), top scorer in the last match against Pakistan, once again tried to play the lynchpin role, however the Irish batting line-up couldn’t manage to mount any sizeable partnerships and eventually ended on 93-8 from their 20 overs.

“We tried to put the Pakistan match behind us and learn from our mistakes, with the aim of just trying to go better every game. A world cup is tough for us - we don’t play the high class sides as often as they play each other, so it can be a very tough learning curve trying to put into place changes just two days after a loss like that against Pakistan.”

“A game like this for younger players can be daunting, especially when you saw how they [India] played against New Zealand - who hammered us earlier in the summer. But it’s one of those things you try put out of your mind.”

“I think once they posted 140-plus that was always going to be tough for us. I’m not saying we couldn’t do it, but when you look at other sides they are playing against top bowlers all the time - they play against the likes of Ellyse Perry several times a year. Today was the first time I’d faced some of those bowlers for several years. That’s the difference with the top sides.”

“We have played in this tournament every two years for the past while, and while we build up to the tournament each time, the occasion is still big for us. I think you can see the foundations are there for us if we were a professional side. I think if we regularly had players going to play in overseas competitions, you’d see the girls would be ready to go all in.”