Boost for Ireland ahead of Pakistan series 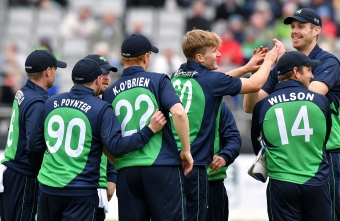 IRELAND have been handed a major boost with the return to the squad from injury of Niall O’Brien and Craig Young for the KPC Group ODI series against Pakistan next month.

O’Brien (calf) and Young (elbow) missed the drawn Afghanistan series along with Boyd Rankin, but all three are now available for the clashes at Malahide.

“It’s great to have an almost full strength squad to choose from,” said Ireland Head Coach John Bracewell. “The bowling unit performed superbly against Afghanistan with the younger seamers in particular putting their hands up. The return of Boyd and Craig adds to that department and gives us plenty of options which is exactly what a coach wants.

“The return of Niall adds experience to the top order. We tried a few different permutations with the batting order last week - some of which worked and some which didn’t. Ed Joyce was obviously the stand-out performer in his new role as opener, and it was great to see Gary Wilson return to form.

“It should be a fantastic series - there’s a great recent history between the two countries with some great matches over the past decade, and I’m certain it’ll be two tough games when we meet in Dublin next month.”

Ireland famously beat Pakistan in the 2007 World Cup thanks primarily to Niall O’Brien’s 72, while when the sides met in the 2015 event, William Porterfield’s century in Adelaide wasn’t enough to give Ireland a quarter-final slot.

The most recent meetings on Irish soil came in 2013 when a Paul Stirling century and a whirlwind unbeaten 84 from just 47 balls from Kevin O’Brien saw Ireland earn a dramatic last ball tie in the first ODI, while Pakistan won the second by two wickets despite Ed Joyce scoring an unbeaten 116.

Tickets for the KPC Group series are available at Ticketmaster outlets nationwide and via the official Cricket Ireland website www.cricketireland.ie