Injury forces change to Irish squad ahead of UAE series 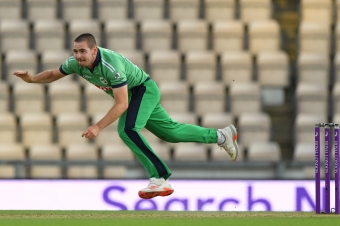 ABU DHABI – Paceman David Delany is returning home to Ireland after complaining of knee pain following training in Abu Dhabi, while Josh Little is flying out to join the squad tomorrow.

While the initial injury was reported to support staff on Monday, a decision has now been made to return Delany to Ireland.

“David limped off the field during our centre wicket practice on Monday citing sudden pain in his left knee. Given that he has previous history with his knee, we feel that it is best to get David home safely and have a review with his knee specialist.”

Josh Little was originally named in the 16-man squad, but in mid-December he was forced to self-isolate after a close contact tested positive. He was tested at the time, but returned a negative result. However, a second test four days later yielded a positive result and he was immediately quarantined at home in Dublin. All other players and coaches returned negative results.

Little has now completed his quarantine period, and has subsequently returned two negative test results, with no symptoms displayed. He has been cleared to join the squad.

The national selectors are currently considering whether a 16th player will now be sent out as a replacement for Delany and will advise in due course.