Inter-Pro T20 Festival: What you need to know 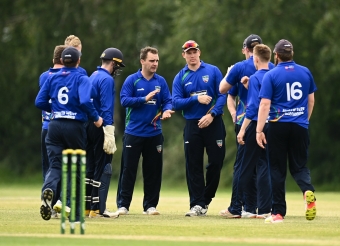 Can the table-topping Warriors retain their lead and win the Trophy?

COMBER - The third and final Inter-Provincial Trophy T20 Festival will take place this weekend at North Down Cricket Club in Comber with the race to the title still wide open. Below is all you need to know about the sides and how you can follow all the action as it unfolds.

The final Inter-Provincial T20 Festival of the Irish 2021 season taking place at “The Green” will begin on Friday with mathematically all four teams still able to win this year’s competition making for an exciting end to the season.

Conditions in Comber are expected to be overcast for much of the festival, which may favour the bowling sides in the first innings. The ground itself is one of the highest-regarded pitches and squares in Ireland and we should expect excellent ground conditions.

All you need to know to follow, watch or attend the Inter-Provincial T20 Trophy festival at @NorthDown1857.

The Knights currently sit third in this year’s IP20 table, with three wins and three defeats. However, with a clean sweep of victories this weekend and with the help of some other results going their way, the Knights could very well be in the hunt for the top spot this weekend with home advantage also running in their favour.

Key players like Mark Adair (who topped the wicket-taker list in the recent T20I series against Zimbabwe) and captain Harry Tector (who scored two half-centuries in the recent ODI series and finishing second-highest run-scorer) are in great form. The home side also features the current top wicket-taker in this year’s IP20 competition - and recent international debutant - Ben White, whose leg-spin bowling will certainly be an asset in this form of the game.

The Lightning currently sit second in the table, with three wins and three defeats - but also hold what could be a vital two bonus points from their previous winning margins. The defending champions will be going in to the weekend knowing exactly what it takes to get over the line in this competition.

The side features stand-out performers like Simi Singh and Josh Little - both players excelled in recent internationals against Zimbabwe, and have performed well in this competition (Singh the second-highest run-scorer with 197 runs at an average of 32.83, and Little the third-highest wicket-taker with 11 in total at an average of just 11.27. The Lightning will also be boosted by the return to form of Kevin O’Brien at international level.

The Warriors currently lead the competition with four wins and two losses, and head into the Festival with the distinct chance of recording their first-ever Inter-Provincial T20 Trophy.

Key players like Shane Getkate (who finished second-highest wicket-taker in the T20I series against Zimbabwe), William McClintock (who made his international debut earlier this month) and William Porterfield will look to continue the north-west side’s run in the Trophy. Captain Andy McBrine is in top form as well, collecting Player of the Match in the last ODI on Monday, and will be relentless in driving his team towards the title.

The Reds may sit fourth on the table, but will be buoyed by the return from injury of Gareth Delany, and will be looking to finish their season on a high.

The Munster side has performed well in both the 50-over and T20 formats of the domestic competition, despite having star players Delany and Curtis Campher missing for good portions of the season. The addition this season of PJ Moor (currently the highest run-scorer in the competition with 205 runs at an average of 41.00) and Matt Ford (136 runs at an average of 34.00) have bolstered the Reds batting, and stepped into the holes left by Delany and Campher. Another impressive contributor has been Fionn Hand - the all-rounder’s ability with both bat (100 runs averaging 25.00) and ball (7 wickets at an average of 25.14) as well as his intensity in the field this season, certainly adds to the side’s competitiveness in this format.

How to watch and how to Follow the Series

The match will be live-streamed on Cricket Ireland Live on YouTube: https://www.youtube.com/c/CricketIrelandLive

You can follow the live scorecards on our Match Centre here: https://live.nvplay.com/ireland/

Spectators are permitted (free entry) to attend the Festival, however must comply with ay local COVID-19 regulations in place on the day. Venue website.