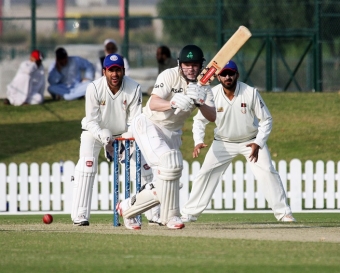 It was a days of swinging fortunes at the Global Cricket Academy ground in Dubai with the match left in a very interesting position and a result almost certain to come on Day 4.

Ireland enjoyed a very productive final session mainly thanks to a George Dockrell triple strike either side of the drinks break. He accounted first for the dangerous Shahzad who he had caught and bowled; soon after he struck twice in an over to bowl Stanikzai for 2 before trapping wicketkeeper Zazai LBW for a second ball duck.

Afghanistan enjoyed a very strong finish to the session as captain Mohammad Nabi combined with Rahmat Shah in a fifty partnership to safely guide his side to 136 for 5 at the close.

Play will start again tomorrow at 6am Irish time with the fate of the Intercontinental Cup set to be decided; Afghanistan need a further 211 runs for victory whilst Ireland need 5 more wickets. listen to ‘William Porterfield after Day 3 I-Cup’ on Audioboo

Afghanistan enjoyed the best of the second session as Ireland lost early wickets including four for just thirty runs as Ireland slumped to 274 for 7 when John Mooney fell caught behind for 3. It took a swashbuckling 47 from just 43 balls that included 9 boundaries from Kevin O’Brien and a 10th wicket partnership of 25 between Trent Johnston and George Dockrell to push Ireland up to 341 All Out. Johnston made a crucial 31 and Dockrell was left with 8 not out which all meant that Ireland have set Afghanistan 347 to win the Intercontinental Cup. A draw is highly unlikely with two more days to play so Ireland will need all ten wickets to win.

Trent Johnston got Ireland off to the perfect start as well as he trapped Shabir Noori plumb LBW for 8 in the first over but Mohammad Shahzad has already looked to attack and Afghanistan have reached tea at 31 for 1.

Afghanistan will need 316 more runs, Ireland will need 9 more wickets and it is game on in Dubai.

Ed Joyce fell in the first over of the day having added just four to his overnight score as he was bowled by a beauty from Dawlat Zadran for 78. This brought Andrew White in to the crease to join Andrew White and they set about putting together a partnership to build Ireland’s lead. White had to survive a very close call as he edged to slip but the umpires judged it did not quite carry whilst O’Brien accumulated runs comfortably at the other end. With just 15 minutes to go to the lunch break however the leg-spin of Rahmat Shah was called upon and he has turned the shape of the game with as it comes towards the halfway stage in terms of time.

First he got Andrew White LBW for 39 with a googly following a long appeal and in the final over before lunch he produced a ripping leg-break to have John Anderson caught at first slip for just 2. Ireland have an overall lead of 255 but will be wanting to add to that total considerably throughout the rest of the day.

You can view the live scorecard in full here.