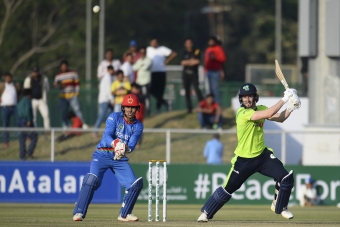 GREATER NOIDA, India – Despite seeing the three-match T20 International series against Afghanistan slip away after yesterday’s defeat, captain Andrew Balbirnie has called on his squad to focus on the last match of the series as part of the longer-term goal of preparation for the T20 World Cup later in the year.

The Irish team’s form in T20 International cricket has improved significantly over the last 12 months, having risen from 18th in the world rankings to 13th, however Ireland has now gone ten matches without defeating Afghanistan in this format of the game – registering their last win in 2013.

Balbirnie believes the gap between the sides is narrowing, and speaking from the team hotel, he was reflecting on yesterday’s loss in the second T20I:

“It was disappointing after a very good start with the ball – I thought the guys bowled brilliantly in the powerplay, but we just let it get away in that back end. I thought they batted well, and our skills maybe weren’t as good as we wanted them to be. But that’s T20 cricket, if you miss your area then you can go around the park – unfortunately that’s what happened, but our bowlers will learn from it.”

“It definitely feels like it’s one that got away, as did the other night – I don’t think we’re too far away from them – it’s just the small periods in the game where we need to be better.”

“The plan was just to restrict them in the first six overs, then capitalise on that during the middle overs – to look to take regular wickets during that period – we maybe didn’t do as well as we should have, but there are still plenty of positives to take into the final game in Tuesday.”

Looking ahead to the last match tomorrow, he said:

“Come Tuesday we’ve just got to concentrate on winning those couple of overs we’ve failed to so far, with bat and ball. We’ve lost a bit of momentum with the ball and the bat in similar periods – sort of the 10-15 over mark, so if we can get those overs back in our favour then we’ll get the result in the last game.”

Both Ireland and Afghanistan have qualified for the 2020 ICC Men’s T20 World Cup in October/November in Australia.

Cricket fans in Ireland and the United Kingdom will be able to watch the series via livestream at: https://www.youtube.com/channel/UCNU0Vv6U1xZS82cIQrgDeqw