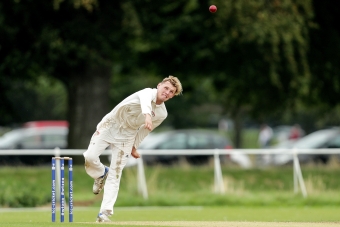 DUBLIN – On the cusp of the Ireland Wolves squad leaving for its month-long tour of Bangladesh, leg-spinner Ben White is looking forward to his first tour with the Wolves, and sees his selection as vindication for his hard work over recent years.

The tour is scheduled from 17 February to 19 March 2021, and will see the Wolves play a multi-format eight-match series against Bangladesh A.

“I was over the moon to get the call from the Chair of Selectors, and am very grateful to be given the opportunity to represent my country again after being fortunate enough to play Under-19s a few years ago.”

“I made a few goals at the start of last year to try and get back into contention of higher honours, and I’ve put in a lot of hard work over the 12 months or so with Stephen Moreton my coach in Phoenix CC to try and make that happen, and it’s just very nice feeling that it’s paid off up until this point.”

“I feel like I had a pretty good season in 2020 in the midst of the pandemic. We were obviously very lucky to be able to get out a play any cricket at all under the circumstances, but I feel the hard work put in before and throughout the season really paid off, and it’s really nice to be back enjoying the game again.”

Dublin-born White has been a cricketer from a very early age, but legspin came along after being spotted messing around in the nets:

“I’ve played cricket ever since I can remember - it started when my Dad insisted on bringing me down to the Phoenix Park to try it out, as he would’ve played it a lot when he was younger back in New Zealand. And I really just took too it like a fish to water. I’ve played my whole career in Phoenix CC, who have been so great in my development and I can’t thank them enough!”

“Growing up I played every sport under the sun - cricket, rugby, football, GAA, Hurling to name a few. But cricket was my number one focus.”

“I used to bowl seam, as everyone seems to when they start out - and I actually opened the bowling for Leinster Under-11s way back when under the great guidance of Brían O’Rourke. But I stopped at Under-13s when Mike Halliday saw me messing around in the nets bowling leggies in a game of stumpy and demanded I give up the seam and start bowling them from then on. So I guess I have Mike Halliday to thank for spotting them and Matt Lunson for working on them with me.”

Despite a long-term connection to Phoenix Cricket Club, late 2020 saw White move to CSNI in Belfast:

“Well, after the 2020 season I realised that there wasn’t a great chance of me breaking into the Leinster Lightning side, as it is a very strong outfit and has some very established current international spinners in the side.”

“I actually wasn’t quite sure what I should do with myself, but then I received a text from Harry Tector asking me would I be interested in going up North to play my cricket, as Gary Wilson was asking about me for CSNI which would then allow me to have a go with the Northern Knights. So I spoke to Gary and Jonty (Simon Johnston) and they seemed to be very keen on me coming up - so I guess that’s how it all came about, and very I’m excited by the challenge.”

“It’s sad to move on, but I’d like to thank Phoenix CC for getting me to the position I am in now.”

Bangladesh won’t be foreign climes for White, as he has already had some experience playing cricket in that part of the world:

“I’m expecting it to be very hot and humid, and hopefully it should be very spin friendly. I feel I’m bowling quite well at the moment and feel pretty confident in my ability, so I’m just really looking forward to getting over there to play some hard cricket as is possible under the current circumstances of COVID, We are so lucky to get the chance to go to a country like Bangladesh to be doing something we love, so I’m just relishing the opportunity.”

Given the tour will involve living in a bio-bubble for a month, how does White plan to spend his down time?

“I’ll be bringing a book or two with me, as well as the Xbox to keep myself occupied. I’m just really looking forward to being able to learn from the likes of Graham Ford and Stuart Barnes as it’s such a great opportunity for myself to better myself as a cricketer.”