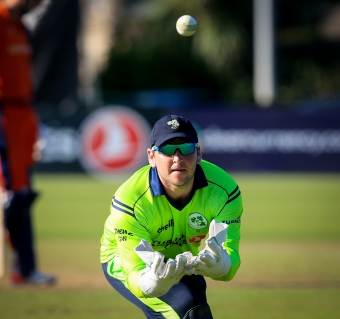 MUSCAT – Following Ireland’s win over Nepal in the today’s T20 International in Oman, Captain Gary Wilson was speaking about his squad, the performances over the last week and looking ahead to the start of the ICC T20 World Cup Qualifier next week.

Speaking from the Al Amerat Cricket Ground in Muscat, he said:

“I think it’s fair to say that we haven’t put a complete game of cricket together yet this week, and we’re probably still waiting to play our best game. The Hong Kong game on Monday was very good, with that incredible effort of Kevin’s in getting 124 and then bowling pretty tightly as well, but for me the most pleasing game of the last week was perhaps today’s game against Nepal. We really had to scrap around in the end to get to 145 with the bat - I thought Stuart Thompson was outstanding at the end of that innings – but what was more pleasing was the way we kept fighting in the field and the way the bowlers bowled was excellent.”

“We’ve had some very good batting performances of late, and we’ve spoken about the top 3 or 4 taking responsibility to put up big scores – which for us is really the key to putting big team scores on or chasing down big targets.”

Asked about his approach to managing his bowlers, he said:

“In terms of bowler rotation, it’s very much a game-by-game basis. Dockers [George Dockrell] today, for example, bowled his four overs right through, but on other days it might be one, two or three over spells. It’s very much what we feel is required at that time or on a particular day.”

Asked about the feeling in the squad and how comfortably some of the new players seem to have settled in, he said:

“We are pretty confident as a squad overall - the last two to three weeks have helped massively, even going back to the inter-squad games there were a lot of good performances put in there. It’s particularly pleasing to see young guys come into the side and sticking their hands up. Mark Adair I thought has been particularly good with the ball, and then Gareth [Delany] and Harry [Tector] have done a great job with the bat - and Gareth with the ball as well.”

Asked about what the next few days entail, he said:

“We’ll have a few days off now. We head to the UAE on Friday and will probably get back into training when we get there. The players will just try to relax and recover in the meantime after what has been a pretty gruelling week in the heat. It’s been tough getting used to conditions - it may have said 34 or 35 on the old thermometer, but it certainly feels a lot hotter than that out there in the middle. But the whole week has been an outstanding exercise for us and overall we’re happy with where we are at going into the Qualifier next week.”

The Irish squad now has a rest day after completing their matches in the Pentangular T20I Series in Oman. They then move to Abu Dhabi on Thursday ahead of the start of the Qualifier.