INTERVIEW: Ed Joyce about the challenge ahead for the Ireland Women’s cricket team 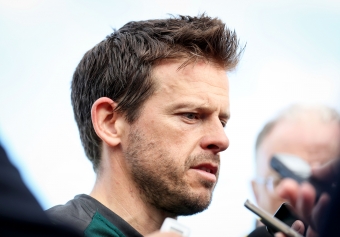 DUBLIN – Interim Head Coach Ed Joyce believes the quality and talent is there, but there is a lot of hard work ahead before the Ireland Women’s cricket team fly to Scotland for the ICC Women’s T20 World Cup Global Qualifier in August.

“It’s been a challenging week coming into the role without much time before the Zimbabwe series, but I’ve had some good contact time with a number of the players prior to taking on this interim role through 1-to-1 sessions with the contracted players, and being asked by Aaron Hamilton to come in and run some sessions. It has been a bit of get-to-know some of the senior squad over the last week, but we have a number of sessions planned this coming week, and I’ll hold some 1-to-1s to really see what some of the squad want to specifically work on.”

“We’ll also spend some time making plans around the Zimbabwe bowlers we expect to face. We played them last year so have an insight into what their bowlers are likely to bring. And the same goes for their batters. I’m definitely someone who likes to prepare ahead of a series and prepare for the opposition we’ll face, so that will be my focus over the coming week.”

Being his first international Head Coach role, Joyce was asked if he felt ready for this next step in his career:

“I do feel I have a huge amount of experience in the game and I am extremely motivated to do well. We have a very exciting young team with a huge number of talented players - not just in the senior performance squad, but also in the Academy. I was there out at Oak Hill last Sunday at the Super 3s and the talent was there for all to see. Saying that, there is a lot of work to do and I’m prepared to get stuck in.”

“In terms of success, I think the proof will be in the pudding with how we do over the next two to three months. With the four senior players retiring last year and the absence of Kim Garth through injury it will be challenging, but we have some quality players and some experienced players to help steer us through these qualifiers ahead. As a player, I’ve been through this scenario before, so I feel I can bring some of that experience to the table as well.” Asked if he had identified any needs or areas to improve already, he said:

“One area perhaps is to bring more power into our game. Watching some of the top teams, like England Women playing West Indies this week, the athleticism in the field is very evident, and when they hit the ball they really hit it really hard, and they’re hitting a lot of boundaries. We’ve got some players who can do that really well and others who have a way to go, so that would be my focus in the medium term if I did get the opportunity to continue in the job after the qualifier.”

Asked about the boost to the squad with the return of captain Laura Delany, he said:

“Laura is a quality player - she’s the skipper and very much the leader of the group. I’ve done a fair amount of work with her over the last couple of weeks, including some 1-to-1s. She hits the ball very hard and knows her own game well and her bowling is extremely handy when she’s fully fit. Her leadership skills are also really developing so she’s great to have back. Hopefully she can have a great series against Zimbabwe and get her confidence up and get the confidence in her own body up - she’s had some issues with injuries so it would be great for her to get through these games unscathed.”

“I thought Kim [Garth] filled in really well in Laura’s recent absence - not only captaining the side but playing well herself. That’s a great sign for her, but she’ll be missed greatly and hopefully she can make it back in time for the Qualifier in August.”

And what is it that Ed wants to achieve in the short term?

“What we all want is a confident and happy group going over to the Qualifier tournament. It’s really important to get to that point and winning games of cricket is the best way to achieve that. It’s very important for me as the new coach to see the squad play as many games as possible, so hopefully the weather plays its part at Oak Hill and in the North so we get through six games and see lots of cricket. We’ll attempt to try people in different roles and try and get somewhat of a settled squad before we get to that quadrangular series in August, which is also going to be very important leading into the Qualifier.”

* The T20I series will be doubleheaders with Ireland and Zimbabwe Men’s teams playing at the same venue on the same day.