Interview: Ford, Stirling open up about Oman tournament, and bigger challenges ahead for Ireland 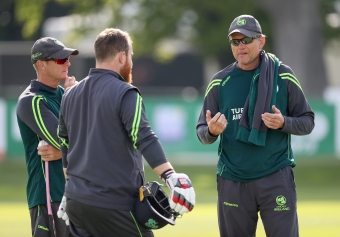 MUSCAT – On the eve of the first match of the Quadrangular T20 tournament in Oman, Head Coach Graham Ford and Captain Paul Stirling sat down for an interview. They discussed Ireland’s preparations, the challenge in Oman and the squads future focus.

“It is a busy year for our cricketers, but also an exciting and challenging phase for Cricket Ireland. Achieving results is something we all want but there is also an understanding of the importance of bringing through some of the younger lads. Their progress is vital to our cricketing future.”

“We have the ICC Cricket World Cup Super League ahead of us in 2020 through to 2022, and of course qualification for the 2023 World Cup is a huge priority. We therefore need to have an eye on the future and give some of the younger talent an opportunity to play alongside some of the established players.”

“The support and knowledge-sharing by the senior players is very important to the process. The T20 cricket we are currently playing gives us a chance to do this and hopefully some of the younger lads will show that they have what it takes to become the match-winners of the future.”

“To be frank, over the past few years our T20 performances have not really been anything to get too excited about. Currently we are working hard on all the basics of T20 cricket – particularly skill execution with the ball, being the mastering of variations and becoming more accurate when aiming for the blockhole during the closing overs. Batting-wise players are working on expanding their scoring options, particularly against spin. And, of course, improving our speed, agility and energy in the field.”

“The recent Wolves matches were extremely important and crucial to developing a greater depth in our cricket. The step up from Inter-Pro cricket to international cricket is massive, and the Wolves matches give our younger players an opportunity to sharpen and develop their skills at a more testing level - one that is a lot closer to International level. This tougher cricket also gives the selectors a better indication of who has what it takes to become a performer at the top level.” Asked about the opening warm-up matches, he said:

“Unfortunately the warm-ups were rather disappointing. I guess the major positive is that there was a big improvement in the second match although we are still a way off where we need to be. Some players have been playing competitively and some have only had indoor net preparation and I guess it is fair to say that those that have not been playing competitively may need a bit of time to adjust.”

“All in the camp are very determined to improve their contributions and the work ethic within the group is impressive. At this stage it is about working very hard to improve those important basics of white ball cricket.”

Asked about the selections of the squads for the Oman tournament and Afghanistan series, he said:

“The selectors gathered as much info on player performances as possible, particularly plenty of statistical information from Scott Irvine, our Performance Analyst, which certainly helps. In other systems it is a lot easier with players being watched and monitored in their competitive domestic matches, while at this stage of our development the selectors are not able to watch all performances, but hopefully we will get to that down the line.”

“Captaincy has been a brilliant challenge. The skill of being able to focus on my personal fielding as the ball is delivered has been the most tricky bit so far, but that will naturally become easier with time.”

“Our performance during the first warm-up game on Saturday was almost certainly down to lack of match practice and most of the guys coming from indoors. It was clear that the skills required that you can’t practice in the nets environment weren’t up to scratch - most notably the running between the wickets and hitting the fielders. At this stage, the time for working on your game in the nets is limited, it is just about getting prepared as best you can knowing that the games come thick and fast from here on. Most of our improvements will come from learning from our mistakes in the middle and showing that we can solve the problems when we cross the rope.”

“I have certainly learnt a lot by playing in overseas competitions – particularly the level of detail that players think about the game has been noticeable throughout this winter, and it rubs off on everyone else.”

“One takeaway relating to captaincy has been that it isn’t acceptable to bat or bowl without a plan and hope that it will happen, but it is OK to have a plan and it doesn’t work. From a team point of view, it is important to find what style of play you want to go with. For instance, if we don’t have the firepower of the West indies or Afghanistan, then we’ll need to limit our dot balls and be precise with our gap-finding for boundaries to get to the match-winning scores and give our bowlers the chances to defend.” Image: Paul Stirling in the nets

Asked about the elevation of Kevin O’Brien to the top of the order, he said:

“Kev has certainly got the attributes to succeed at the top of the order and has always been one of our best ball strikers. I am sure he is looking forward to the new challenge of getting the Irish team off to a good start in T20 cricket, and, of course, this change has also created opportunities for batsmen in the middle order to take their chance and cement a place in the side.”

Asked about why he has yet to bowl himself in the warm-up games, he said:

“I certainly haven’t ruled myself out with the captaincy armband. If the situation dictates that I need to bowl then I will have no hesitation. We’re lucky to have plenty of part-time options who can come and do a job for the side with one or two over bursts. It was important to get the main bowlers overs in for these two games with the tournament commencing on Wednesday.”

Asked about the injection of several new faces in the senior squad, he said:

“It has been great getting guys like Harry Tector, Shane Getkate and Lorcan Tucker involved in the senior set-up, and their call-ups have been thoroughly deserved on the back of performances in Sri Lanka.  They have all impressed so far with their attitude and it is now about going out and grabbing the chance with both hands.”

The Ireland Men’s team is in action tomorrow (Wednesday) in the first T20 International against Oman. Oman Cricket has confirmed that all the T20 International tournament matches will be livestreamed, with the link to be posted on their website prior to the first match.