INTERVIEW: Gareth Delany on opening, being new to touring life and a whirlwind 2019 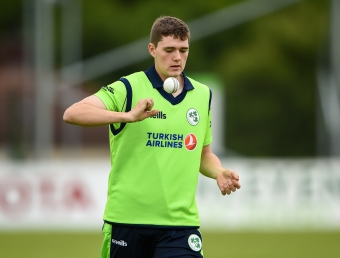 Delany on debut against Zimbabwe

MUSCAT – Recently-capped international Gareth Delany – on his first senior tour with the national side – was speaking about his year and his expectations ahead of the five-nation T20 International tournament to be played at the Al Amerat Cricket Stadium in Muscat starting on Saturday.

Dublin-born Delany, 22, made his international debut in July this year. He was part of the trophy-winning Leinster Lightning side that won two titles in 2019, and plays his club cricket with Leinster Cricket Club in Rathmines.

Delany has developed a reputation for versatility - a big-hitting top-order batter and wicket-taking leg-spinner, his skills were on full display against Scotland last month when he claimed 2-31 and hit his maiden international half-century in only his third international appearance.

Speaking from his hotel in Muscat, Delany said:

“I’ve never been to the Middle East before, so I’m excited to see what it’s like. Coming straight from autumn in Dublin, the heat hit us straight away when we walked off the plane, so it will take a few days to acclimatise.”

“The guys who have been here before say that the decks are pretty good for batting, but also take a bit of turn so that’s good to hear.”

“To be honest, I didn’t think back in January that I’d be where I am now. The Sri Lanka trip with the Ireland Wolves in January was an amazing opportunity and challenge. Personally I didn’t do as well as I had hoped, but it gave me an idea of what was required to play at that level and gave me more motivation to be better and develop further. I was probably hoping or targeting next year as maybe a time to be involved internationally, but things have worked out nicely over the last 9 months, so I’m just hoping that things continue to go well.” Image: Delany on his way to a maiden international half-century

Last month, he featured highly in the T20I series-winning team at Malahide:

“It was great to be able to win the Tri-Series, and especially against some of our nearest rivals [Scotland and Netherlands]. We played three tough matches which will probably reflect the types of games that will be coming up, so to be able to get that little bit more experience at this level was great. We played really well, but there are obviously a few things that we can improve on - so that’s also very positive, that we can still get better as a group.”

“Personally, I learnt a lot from that series. I need to be more clinical in executing my skills, whether that’s getting out of an over that hasn’t gone for many with the ball, or recognising what the bowler is trying to do and not to play to his plan while batting.”

Asked about his development as an all-rounder, he said:

“The last couple of seasons I’ve opened for the Leinster Lightning and I’ve really enjoyed it. Facing a brand new ball at the top of the order allows you to be very positive in T20 cricket. Fortunately I’ve had a number of captains that have encouraged me to bat with freedom and take the odd risk to score quickly.”

“With the leg spin, I’ve been bowling that since under-13s level. A couple of coaches suggested it to me at the time as we had a lot of pace bowlers and I obviously wasn’t one of the better ones! So they started teaching me how to bowl leg spin, and I bowled well that season so decided to stick with it.”

Image: Delany’s first international wicket was a caught and bowled

Touring life is still new to Delany, so how will he pass the time between playing and training?

“I’m still new to being away for a trip of this length, so I’ve brought a couple of books with me. I also enjoy reading the paper or following up on what’s going back on at home. I made sure to download a couple of Netflix series as well. It will be nice to have a look around as well, especially looking forward to seeing Abu Dhabi and Dubai and what they have to offer.”

The Ireland Men’s squad has arrived in Oman where they will play four T20 Internationals. The squad will then head immediately to Abu Dhabi where they will compete in the ICC Men’s T20 World Cup Qualifier.

A livestream of the Oman fixtures will be available (details TBC).