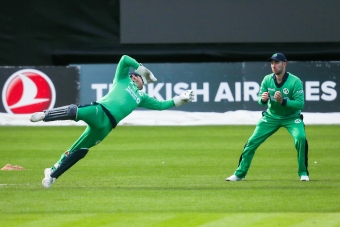 Wilson dives for a catch during the recent ODI against England

BELFAST – Ireland’s T20 International captain Gary Wilson may have made his international debut for Ireland almost 14 years ago, but he is still playing a vital part in the international set-up and is enthused by the talent he sees coming through the system north of the border.

The 33-year old was born in Dundonald and made his international debut just down the road in Bangor in June 2005 against the MCC. After 12 years playing county cricket in England for Surrey and Derbyshire, he decided to return home to Belfast and re-join his former club CSNI.

Wilson looking forward to once again playing in the green in Stormont where Ireland will play two one-day internationals in the GS Holdings ODI Challenge against Afghanistan on 19 and 21 May 2019.

Speaking at training today, he discussed his move back home to Belfast:

“It’s been really good, I’ve really enjoyed my time since I’ve been back here. The family have settled in well and it has been good to be around extended family - having grandparents around for the wee man [Wilson’s son Oliver] has been great.”

“It has also been great to settle into the Northern Knights set-up as well - I really feel I can have a positive influence there and I think we’re seeing some change already, so that’s been brilliant.”

Asked if he had any observations on the emerging talent he sees north of the border, he said:

“With regards to the younger players I’m seeing lots of exciting talent. At the national level we’ve still only got 19 fully contracted players and six part-time after that, so outside of that it’s still about guys trying to find time to train and find good quality facilities to train at.”

“But if you look hard enough you see the talent is coming through. For these lads – if they work hard enough and ask the right questions of the coaching staff and senior players they can go a long way. Hopefully that’s where I can have a positive impact on the other guys around me, the younger players.”

“Obviously in England you’re spoilt for facilities and there’s always an opportunity to hit balls. I think now these guys here [in Ireland] are starting to have that opportunity, so hopefully we’ll see them go from strength to strength.”

Ireland and Afghanistan meet for the first of two one-day internationals as part of the GS Holdings ODI Challenge on Sunday 19 May, starting at 10.45am. Tickets are available at the gate - €15 for adults, under-16s go free.

A live-stream will be available, with details posted on Cricket Ireland social media channels.