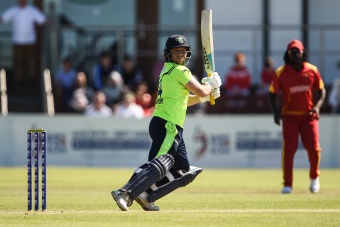 BELFAST – Ireland’s T20 International captain Gary Wilson believes he will be leading one of the most exciting T20 sides he has been part of, as his squad prepare themselves for a T20I tri-series with Scotland and Netherlands in Dublin starting Sunday.

Wilson, 33, took over the captaincy of the international T20 side in 2018 and, in conjunction with Head Coach Graham Ford, has been studiously planning, preparing and moulding a dynamic squad that will go with positive intent to the ICC Men’s T20 World Cup Qualifier next month.

Speaking on the eve of joining the squad in Dublin for the Tri-Series, he said:

“My philosophy, if you call it that, to T20 cricket is that you do what you need to do to win the game of cricket. It’s all about assessing conditions on the day and playing to your strengths. We all want to see exciting players and the three-dimensional cricketers playing for the national side, and I think that has really been reflected in the squad that has been picked.”

“As a squad, we probably don’t have the experience that we’ve had in previous qualifying campaigns but I do believe it’s one of the most exciting T20 squads I’ve ever been part of.” Image: Wilson claims a run out against Zimbabwe

Asked about what aspects of the squad will be key, he said:

“It’s important to have a strong fielding side in this format, because the small margins in T20 cricket can make the difference between a win and a loss – sometimes it comes down to a run saved here, a diving stop there or an excellent catch. Harry Tector is a great example of this - he’s undoubtedly one of the best fielders in the country and it’ll be exciting to see what he can bring to the squad.”

“Looking forward to the Qualifier in the UAE, I think spin will play a key part, so we’ve picked three spinners in the squad. The later it gets into the tournament in those conditions may mean you could even see all three spinners playing in the same side. It [the Qualifier] should be a case of just trying to play good cricket on good wickets, but I do see spin playing a big part as we move through the tournament.”