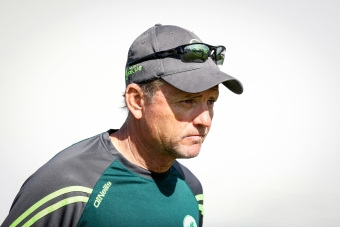 Graham Ford is pleased with squad progress over last 12 months

BELFAST – When Ireland Men’s Head Coach Graham Ford came into the role in late 2017, he knew there was a job to do with a squad that was not only in transition, but one gearing up to compete on cricket’s biggest stages. With Test cricket in the offing, the work over the last 12 to 18 months has been intensive, but is starting to bear real fruit.

The 58-year old South African-born coach has previously led some of world and English county cricket’s leading sides – South Africa, Sri Lanka and Surrey are just some names on his CV. He was even offered the Indian Men’s cricket team job at one stage, however he has found a home as Head Coach of one of world cricket’s most recently named Full Members and has been impressed by what he is seeing:

“Pleasingly, over the last year many of the players have grown impressively as cricketers and I feel that as a team there are exciting signs of progress. The development of a competitive national team is highly dependent on the quality of our cricketing system and the people who work and coach within the system. Much good work is being done by those involved and as a result, our systems and structures are being developed and improved. Ultimately all this ensures that players have a better opportunity to improve their games.”

“Having said that, we are in the early phases of a long term process and there is still much to be done. If we are aiming to compete with the best, we will always need to be totally committed to improving all our skills. The game is changing all the time and teams around the world are constantly working on ways to get better. For us there will always be room for improvement in all areas.” Asked for his assessment of the 2019 international schedule to date, he said:

“Looking at recent performances, there have been pleasing aspects. The team did well to tie the away series against Afghanistan, and although we did not win any Tri-Series ODI matches, or the England game, there were some good individual and team performances on display against high-class opposition.”

“One area we are getting better at is assessing conditions and situations, and constructing our batting innings accordingly, with the aim of being able to put the opposition bowlers under big pressure at the end of an innings.”

“Likewise, our bowlers are creating more pressure with greater accuracy and consistency. The bowling skills required for the end overs, particularly, are so important to success in white ball cricket, and our bowlers are working hard to improve this aspect of our play.”

Another important aspect of the game that he sees improvement is fielding:

“During the recent Zimbabwe ODI series I was really pleased to see the improvement in the fielding. In the past, we may not have been the most gifted fielding unit in world cricket, but in recent times our attitude, energy and commitment in the field was most impressive.”

Moving from 50-over to T20 cricket, Ford spoke about the transferability of learnings between the two formats:

“There are many similarities between the two white ball cricket formats, and hopefully work done during the 50-over phase of our season will help our performances in the T20s. For example, the end over skills and variations that our bowlers require are the same in both formats. And for the batters, the ability to find space and hit with power is important whatever the game.”

“T20 cricket though is a much faster moving game and situations can change rapidly. We are working hard on becoming a team that can think quickly on our feet and adapt well. Smart decision making under pressure is a big part of the game.” Asked about the quality of the pathway system below international level, Ford said:

“Over the last 18 months the selectors have tried to observe as much cricket as possible. Players are being assessed all the time (game and training time) with the aim of selecting the players who have match-winning potential, a tough competitive temperament and the right attitude.”

“The recent T20 Inter-Provincial Festival was of great interest to us in this respect, and a great lead-in to the current series we’re playing. As was the Ireland Wolves programme – these domestic structures are providing increasingly competitive and high-quality cricket that is bearing fruit within the senior squad.”

While minds are firmly on the T20 fixtures at hand, Ford admits that a great deal of work is already underway preparing for the upcoming Test match against England at Lord’s:

“The schedule is not ideal, and it will be tough for some of the lads to change from T20 mode to Test mode very quickly – it will require those players to adopt a rapid mindset change. However, for those not involved in the T20 series against Zimbabwe we have started their red ball work already.”

And is he personally excited about the prospect of leading the side in a Test match at Lord’s?

“I have been very fortunate to have a number of visits to Lord’s with Kent, Surrey and Sri Lanka. It is such an impressive and special place, and is a place full of reminders of great past players and brilliant past performances. And, of course, the atmosphere at a final or a Test match really does make it a very unique and special venue. We are all looking forward to getting and taking in the experience, but that is soon – our current thinking is firmly on Zimbabwe and the two remaining T20s.”

Ireland and Zimbabwe meet in two T20 internationals on 12 and 14 July 2019. The matches are to be played at Bready. Tickets are available at the gate, £10 for adults, under-16s go free.