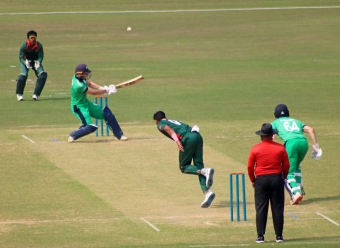 The Wolves posted 260 - probably 20 runs short of what they should have, Tector said

He was speaking after today’s game from the team hotel. On the result he said:

“It is obviously disappointing, we were probably 20 runs light of where we should have been. It was only thanks to Lorcan [Tucker] that we got to 260. But credit to the lads, they stuck at it when it wasn’t easy in the second innings and - to be fair to Bangladesh - I thought they played really well.”

“There are definitely signs of progress - we have individuals standing up at various times and playing well - Lorcan was excellent today, and Gareth Delany’s bowling has been brilliant in the first two full ODMs that we’ve played. Everyone has shown signs of improvement, so hopefully, we can carry that improvement and get a couple of results in the next two games.”

“I think we are probably guilty of chewing up a few too many dot balls early on and leaving too much to do down the back end. That’s been a theme now over the last two games, so that is definitely something to work on. It’s probably where you could put it down to why we were 20-odd light.”

“Lorcan batted beautifully - that sort of innings is one that not many people in Ireland are capable of knock. Coming in when he did, and the way he did - from his first ball he batted so well and shifted through the gears so effortlessly. It really showed his class and that is what we are looking from our senior players - and he certainly did that today.”

“We’re hoping James can play a further part in this series, obviously, we don’t yet know the full extent of the injury, but I don’t think there’s anything too serious thankfully. We’ll see how he pulls up in the morning.”