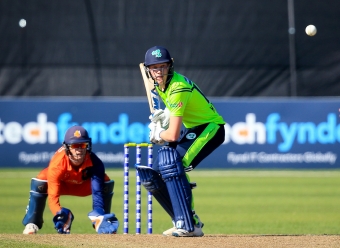 ABU DHABI, UAE – The year 2019 has seen several new caps handed out to mark international debuts, and one of those debutants that has made a big impression in the senior international side has been Cap #706, Harry Tector.

Tector, 19, plays his club cricket with YMCA in his home town of Dublin, but his inter-provincial cricket with the Belfast-based Northern Knights. After captaining the Under-19 Ireland side to the 2018 Under-19 World Cup, Tector earned a central contract with Ireland for 2019, and subsequently made his senior international debut against Scotland exactly one month ago to the day. He struck his maiden international half-century in his second appearance and hasn’t looked back since, scoring 146 runs over six innings at an average of 36.50, and most impressively with a 156.69 strike rate.

Speaking from the team hotel in Abu Dhabi, Tector spoke about touring life:

“This is not actually my first senior team tour - I was out in Oman and India earlier in 2019 but didn’t play, so this is an altogether different experience. That trip, plus the Ireland Wolves and Under-19s World Cup experiences had given me a taste of what a cricket tour is like, particularly spending an extended period of time away from home, so I am certainly enjoying it so far. We’ve had a good build up to the Qualifier, so it’s now just waiting to get started.” To the outside observer, the newer squad members have appeared to have comfortably slotted into the senior set-up, which Tector puts down to a range of factors:

“Individual personalities and general team dynamics help, but it certainly has made it easier coming into a side where there are a number of guys my age, or that I’ve played with coming up with through the ranks with. To be honest, I actually didn’t know a lot of the senior guys when I first came into the squad, but they’ve been really welcoming to me and made me feel comfortable around the change room. In fact, everything in the camp is geared around making you feel comfortable, which is much appreciated.”

Asked what the greatest challenge on tour he has faced so far, he said:

“Definitely the heat. It’s been really hot - mid-30s, even close to 40 on most days we’ve played or trained. So battling the heat has been the main challenge so far.”

So how does he spend his down time on tour?

“I play a lot of golf, for my sins. I’m not a great golfer, but there are a few of us who are keen golfers in the squad. Other than that, I’m rooming with Shane Getkate, who is one of my good mates, and we’ve been watching a fair bit of Netflix or taking the opportunity to use the hotel pool.”

And what has he learned about a team mate on this tour that has surprised him?

“Well, there is one thing about Stuart Thompson. I’m actually a bit of a romantic comedy movie fan – and I’ve discovered Stuart is as well. I certainly didn’t expect that one, but he’s been hitting me up for rom-com movie recommendations!”

The Irish squad has finished its final pre-tournament training session, and are set to take on Hong Kong is the first Group Stage match of the Qualifier tournament on Friday. The match, starting at 11.10am, will be broadcast on Sky Sports Cricket in Ireland and the UK.