Interview: Head Coach Graham Ford assesses his side ahead of World Cup Qualifier 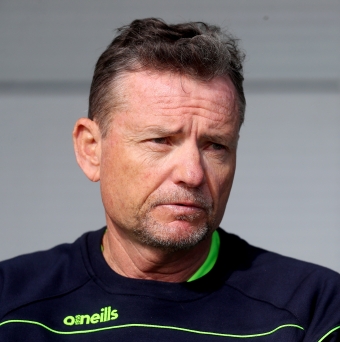 Graham Ford is focusing the squad on the task ahead

ABU DHABI, UAE – Following the completion of Ireland’s two warm-up matches ahead of the ICC T20 World Cup Qualifier tournament, Head Coach Graham Ford believes the squad is in a good place, despite the excessive heat they are experiencing.

Ford is approaching his second anniversary in the Head Coach role, having taken over duties in December 2017. The experienced South African, who held previous Head Coach roles with South Africa and Sri Lanka, has seen his T20 International squad win the Tri-Series in Ireland last month, win three from four games last week in Oman, and continue to show good form in the warm-up games over the last two days.

“It may sound like a cliché, but we have been on a journey as a team over the last two years. However, we are nowhere near finished. We have brought through a number of young players into the set-up, and my belief is when exposing young players to the challenges and pressures of a higher level of cricket it is vital to have some older, experienced heads around them - and the experienced guys have done an outstanding job in building up and supporting the younger lads.”

“We had a good week in Oman last week - some good training sessions and four games against decent opponents. It has given the lads a chance to adapt to the extreme heat and to play and train in conditions that we will play in come the tournament proper. Pleasingly some of the group have found good form and the wins we have had of late have been good for the squad’s confidence.”

“The last few days have seen some good performances from our lads and hopefully there will be even better performances ahead. We’ve also been boosted by the addition of David Delany to the Qualifier squad. Dave adds some pace to the attack and will be a factor in the right conditions, as you saw in the Scotland warm-up match.”

Ireland Men’s Head Coach Graham Ford looks back at today’s win and some of the improvements to be made ahead of next month’s ICC Men’s T20 World Cup Qualifier. #BackingGreen

Video: Graham Ford after the series win at Malahide in September

Ireland has risen in the ICC T20I world rankings from 18th to 14th in the last year – positive progress that Ford believes can continue as the newer members of the squad gain more experience at this level and the squad gels, but he remains realistic about the challenge ahead:

“T20 is a game that is full of ups and downs, they are fast moving and situations change rapidly. We may have seen some good performances but in reality we go into the Qualifier starting from scratch. Switching on and playing really good cricket in the important games ahead is what really matters now.”

Ford also shared an insight into the impact a Head Coach can make during a T20 game:

“During game time the captain and the players need to think on their feet and make quick decisions. The coaches do not have a big impact on the day but do filter in thoughts on batting order options and the structuring of the innings. If we are bowling second, the coaches will look to assess conditions and offer thoughts on what appears to be suitable tactical options.”

The Irish squad has two training days, before facing Hong Kong is the first Group Stage match of the Qualifier tournament on Friday. The match, starting at 11.10am, will be broadcast on Sky Sports Cricket in Ireland and the UK.