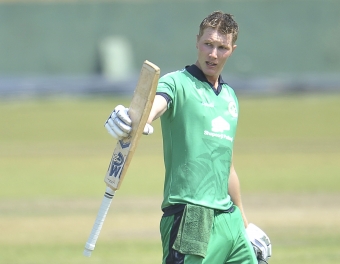 Harry Tector scores a century for Ireland Wolves against Sri Lanka A, 2019

PRETORIA, South Africa – The Ireland Wolves squad has arrived in South Africa ahead of their series against Namibia, with captain Harry Tector expecting a tough series against the side that – alongside Ireland – qualified for the ICC T20 World Cup in Australia in late 2020.

Tector, 20, has led the Wolves squad since January 2019 and broke through into the senior international side in September that year. A member of the T20 World Cup Qualifier squad – where he faced Namibia in the 3rd/4th Playoff, he recently returned from the Caribbean as part of the squad that played the West Indies.

Ireland Wolves will play five T20 and two 50-over matches against Namibia, followed by a 50-over match against the Northern Titans Select XI.

“I’m expecting this to be a tough series. The Namibians are a strong side in T20 cricket - they gave our senior side a good test out in Dubai during the World Cup Qualifiers late last year, so I would expect this to be a good challenge.”

“We’ve only just arrived, so yet to assess conditions, but it was not too hot today, and we’re expecting to be playing on pitches with good pace and bounce. There squad arrived here with no niggles or injuries to report, so everyone is fit and ready to go.”

The last time an Irish side met Namibia was at the T20 World Cup in November 2019, when Ireland won by 27 runs in a low-scoring affair. Tector featured in that match and believes that his Wolves side can take some learnings from that encounter into this upcoming series:

“Yes, we can take a lot from that game – they will have a very similar side to the one back in November. Not only did a few of us play in that game, we have a good bank of footage for the rest of the guys to analyse ahead of the series. It will be different conditions and different grounds, but we’ll do our homework and be as ready as we can be.”

‪: BIG BOUNDARIES, BROKEN BATS This was Harry Tector’s night at the crease last night. Let’s hope he brought a spare bat with him on tour. ‬ ‪#BackingGreen ‬

“We’re delighted to welcome Curtis into the Wolves squad. I actually know Curtis quite well - I met him a few years ago when I went on a transition year exchange to St Stithians College in Johannesburg. We were in the same class together and struck up a friendship there, and have stayed in touch since.”

“Then about a year or two ago he contacted me to say he had an Irish passport and was interested in coming over. That sort of played out for a while, but as you know late last year he signed for my cricket club, YMCA - which is great for the club, and the youngsters at the club will definitely learn a lot from his as well.”

“Curtis is a quality player and I know sets high standards for himself. I wouldn’t like to put too many expectations on him at this stage - as it can be challenging moving into a new team setup and environment, but I would look for him to go out there and do his thing with confidence.”

Curts Campher, 20, is a dual-national who holds an Irish passport. He has declared his intention to pursue his cricket career in Ireland, and it was announced in late December 2019 that he had joined YMCA Cricket Club in Dublin. He has played at Under-19s level for South Africa, and even featured in a World Cup Qualifier warm-up match against Ireland’s senior men’s side in February 2018.

The Ireland Wolves team was created in 2017 to bridge the gap between domestic first class and international cricket. The squad has played full-series against Bangladesh A (both home and away), toured Sri Lanka in 2019 and recorded two victories over visiting senior sides – Bangladesh and Zimbabwe - in 2019.

The squads for the tour are: