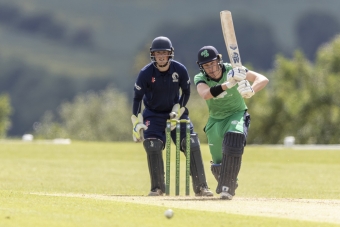 Harry Tector batting against Scotland A

EGLINTON – The Ireland Wolves will once again be in action when they take on Zimbabwe at Eglinton on Saturday, and captain Harry Tector is relishing the opportunity to lead out the Wolves once more against a Full Member side knowing the National Selectors will be watching his sides performance.

Tector, 19, has held the captaincy of the Ireland Wolves in 2019, after captaining the Under-19s squad to the Under-19s Cricket World Cup early last year. He was given a central contract by Cricket Ireland for the first time in November.

Speaking ahead of the Wolves first training session today, he said:

“While playing another Full Member side is a bit of a motivator, playing for the Wolves is in itself the biggest motivation for the squad. At this stage, everyone is aware that if you perform consistently at Wolves and Inter-Pro level then your chance may come at international level. The players are hungry to get out on the field at Eglinton and try to beat Zimbabwe, which I am confident we have the skills and talent to achieve as we showed against Bangladesh in May.”

It’s been a big year for the Ireland Wolves, arguably their most important to date, and Tector was keen to point out the positives that the busy schedule has offered:

“Starting off the year in Sri Lanka was a real test for the lads, and although results didn’t go our way over there everyone certainly learnt a lot and you’re starting to see the benefits this summer. The quality of opposition was clear, 5 or 6 members of the Sri Lanka A squad we took on are playing at the current Cricket World Cup.”

“Obviously beating Bangladesh back in May was massive for us and showed everyone that there is real talent coming through. And while there was a much younger squad that played Scotland A, it too was a good test. While at times we probably didn’t play our best cricket, some individual performances have definitely contributed to some of that Wolves squad getting senior call-ups.” Image: Tector celebrates a wicket with Craig Young against Scotland A

Asked about his captaincy of the Ireland Wolves, he said:

“I really enjoy captaining the Wolves and playing with lads I’ve played with all the way up through the system. Captaining can be pretty difficult job at times, and every aspect can be a challenge, but I am definitely a better cricketer for the experience. It has given me experiences that I can now draw on, and a greater sense of being able to read the game.”

Speaking about the squad earlier in the week, Pete Johnston, Head Coach of the Ireland Wolves, said:

“The Wolves had an impressive win over Bangladesh earlier this summer, and the recent series against a strong Scotland ‘A’ produced a range of good performances from within a young squad which have caught the eye of the senior selectors.”

“The Zimbabwe challenge will be another timely test of our fringe and emerging internationals and all adds to the growing depth of experience we have at this level, we are looking forward to taking the game to a great club like Eglinton where we hope the local community will come out to enjoy some high-quality cricket and most importantly witness another strong Wolves performance.”