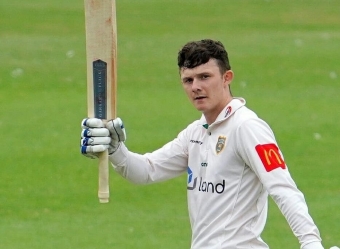 PRETORIA, South Africa – As the Ireland Wolves squad prepares for its series against Namibia in South Africa, Wolves’ top-order batter Stephen Doheny has joined the squad after a summer playing cricket for Randwick Petersham Cricket Club where he experienced some South African pace up close.

Doheny, 21, who plays his club cricket for Rush Cricket Club in Ireland, has spent the Irish winter with Randwick Petersham, an Official Overseas Scholarship Programme Partner of Cricket Ireland. The list of Irish cricketers to spend time with the club features some notable names, including Andy Balbirnie, Barry McCarthy and current Ireland Wolves captain Harry Tector, as well as the likes of Peter Chase, Graeme McCarter, Gary Kidd and Jack Tector.

“I’ve thoroughly enjoyed my time playing cricket in Sydney and feel my season has been a success. The undoubted highlight of the time was facing South African Morne Morkel in my first-grade debut. I just hope I can continue my good form going into the Wolves Tour.” Doheny points to particular areas of his own game that have benefitted from the time in Sydney:

“I have been able to work on many different things whilst playing in Sydney – but importantly mindset. With the two-day format in grade cricket you are forced to put value on your wicket because you might only bat once in three weeks - as I found out the hard way, having not faced a ball in a game for the first month of my trip.”

“Technically, being able to acquire a different perspective on how I approach my game has been a benefit to me. It is interesting to see how the players from Randwick approach their cricket in being familiar with the conditions that are foreign to me.”

“Being given the opportunity to train with such high-calibre players with so much experience playing at a high level is exceptional. I found it so interesting to see how players like Daniel Bell-Drummond, Daniel Sams and Jason Sangha approach their training and their game, which can only help me improve my game going forward.”

In terms of the Namibia series, what are Doheny’s expectations?

“I am expecting a competitive series versus Namibia - they gave our senior guys a good run last time out, so it should be a good challenge. I’m just looking forward to playing with the Wolves again and hopefully, I can put in some good performances in the green shirt. All in all, should be a great tour.”

Ireland Wolves will play five T20 and two 50-over matches against Namibia, followed by a 50-over match against the Northern Titans Select XI.

The Ireland Wolves is a second-tier international men’s team that was created in 2017 to bridge the gap between domestic first-class and international cricket. The squad has played full-series’ against Bangladesh A (both home and away), toured Sri Lanka in 2019 and recorded two victories over visiting senior sides – Bangladesh and Zimbabwe - in 2019.

The squads for the current tour are: