Interview: Ireland’s Craig Young on bowling ‘that’ Super Over 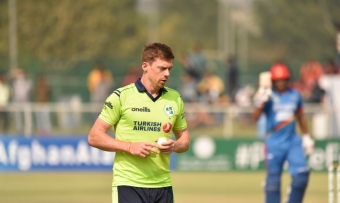 GREATER NOIDA, India – Ireland’s Craig Young bowled arguably his most consequential over in his international career to date, after captain Andrew Balbirnie tapped him on the shoulder to asked if he would bowl the Super Over – Young didn’t hesitate, and delivered beyond expectation.

Young, 29, has had an impressive start to 2020, bowling well in the Caribbean – including an eye-catching spell of 2-31 in the Irish victory in the first T20I against West Indies – then travelled to South Africa with the Ireland Wolves where he claimed six wickets at an average of 27.33.

He then joined the senior squad for the Afghan series and bowled with impressive control and variation against a powerful Afghan batting line-up. Fans watching yesterday’s match were in little doubt about who Balbirnie should turn to when it came to delivering in the Super Over.

“Bally [Andrew Balbirnie] told me pretty soon after we got off the field that I was in bowling the Super Over. I can’t say a whole lot was going through my mind, I was trying to keep it as simple as possible. I spoke with Cass [Rob Cassell], I spoke with Kev and Bally and we come up with a with a relatively easy enough plan. The wicket had been taking slower balls, so that’s what I wanted to bowl the majority of, and slip the odd yorker in there. I wanted to really stay out of their arc, and with the dimensions of the ground, that helped a little bit as well. But I was pretty clear-minded – Bally’s pretty good like that, he just lets you get on with it, but it’s always nice to have the lads on had for second opinions on things, which has been great the whole series and the win was just a little icing on the cake”

“I don’t really bowl as much in the powerplay at the minute, it’s something I want to work as I want to take on responsibility and get stuck in at what is a really difficult time to bowl. If I’m needed I want to ensure I step up and try and do it. At the moment it has been nice to come on when the field is spread and enjoy that little bit of security and implement my slower balls that I have been working on and trying to bowl to set fields. The batters - as they were in the West Indies - have been good at relaying information about how the wickets playing and what are the hardest balls to play, which was all helping the bowling unit.”

What pleased Young most about the tour?

“I think the most pleasing aspect of the squad’s performance this series was that it was nice to back up how we played in the West Indies – it was nice to go out and beat the world champions, yes, but it wouldn’t have been as nice if we came here and got beat 3-0. The Afghans hit a massive ball, they hit the ball a mile and they don’t die wondering – they really play hard cricket with both bat and ball – so it was nice to come here with a young squad and get a win against such experienced guys as Nabi and Rashid.”

“On the bowling front it’s also nice to sign-off a bit for Cass – he’s instilled a great belief in all the bowlers – and the batters as well – but all the boys have benefited from him being here, and he definitely has given a lot of guys confidence, and he’s been absolutely brilliant to have around. It’s a great way to sign-off for him, and I wish him all the best.”