Interview: Ireland’s Harry Tector on that Super Over and his progress in international cricket 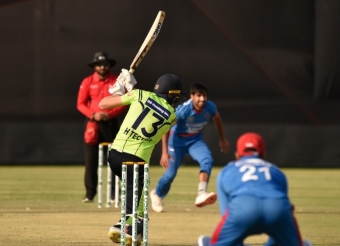 GREATER NOIDA, India – One of Ireland’s newest crop of players, Harry Tector, may only be six months into his international career but he has a clear-eyed determination to drive his game forward, and had a memorable ‘front row seat’ for the last-ball Super Over finish in yesterday’s T20 International victory over Afghanistan.

Tector, 20, finished the three-match T20I series as Ireland’s leading run-scorer with 97 runs at an average of 48.50. While he usually bats at five, Tector found himself elevated up the order to bat during the tense Super Over after opener Paul Stirling was dismissed on the third ball.

Tector scrambled a single off the fifth ball of the Super Over to put Kevin O’Brien on strike for the important last ball. What did the two batters discuss before that final delivery?

“We didn’t discuss too much – just for him to get bat on ball and no matter what we run for two at the very least. If he couldn’t hit it for a four or six, we wanted to bring it back to force a Super Over. We both were pretty calm out there and he was certainly clear about what he was trying to do. Fortunately, he connected on that last ball.” Tector made his international debut in September 2019, and has since been part of the T20 World Cup Qualifier squad and involved in the recent Caribbean tour. So how does he reflect on this series from a team perspective?

“It was a good series – I don’t think the scoreline accurately reflects how close the two teams were. I feel the ending of the third game could have easily played out in the first game of the series, and that would have made a completely different feel about this tour.”

“I think the way we’ve played here in India, particularly with the bat, is getting closer to the way we want to play as a team – which is an absolute positive. There are areas we obviously still want to improve on – particularly in those last five or six overs, to concentrate on clearing the ropes more. It will come though, particularly with our middle-order where me, Gareth and Lorcan - we’re all under the age of 24 and still learning what works best for us, but I think from a team perspective getting that win in the last match was really deserved and gives the whole series a sweeter feeling to it.”

Tector had flown to India straight from South Africa where he was captaining the Ireland Wolves in a series against Namibia:

“It was pleasing that I was able to bring in my form from the Ireland Wolves tour, I felt in good touch and felt I had a good game plan going into this series. I had never faced Rashid before, so I talked a lot with other batters, particularly with Bal [Andrew Balbirnie] to come up with a plan to play him – and it came off to a degree.”

The first time Ireland has beaten Afghanistan in T20I cricket since 2013.