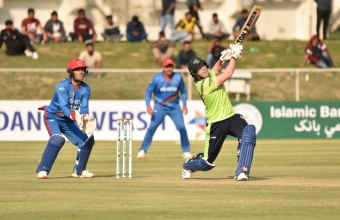 GREATER NOIDA, India – Ireland’s match-winner Kevin O’Brien was reflecting on yesterday’s victory, his approach to ‘that last ball’ and offers praise to many of the younger players in the squad – but knows that the senior players have a big role to play in the ongoing improvement and direction the squad needs to take.

O’Brien, who celebrated his 36th birthday this time last week, was announced as Player of the Match in yesterday’s third T20 International against Afghanistan after striking the world’s number one-ranked T20I bowler for six off the last ball of the Super Over to register his sides first T20I win against Afghanistan in seven years.

“It was obviously a great way to end the series and particularly pleasing to beat Afghanistan after such a long time. While the the positive thing was getting the win, maybe more important was the way we improved as a squad from game one to game three - especially the bowling unit who collectively assessed conditions and adjusted their game plans to opposition batters accordingly.”

Hear from Kevin O’Brien about the last ball of the dramatic T20I today against Afghanistan.#BackingGreen  pic.twitter.com/CI8cN9t6Zs

Asked whether the shot he played off the last ball was pre-mediated, he said:

“I backed away, and once I saw Rashid throw a bit of air and flight onto it, I swung as hard as I could. I actually didn’t think I had hit it far enough, I thought it was going to be caught on the rope, but luckily it just crept over. So obviously I was very fortunate to get enough bat on it and get it over the rope for six. It was pre-meditated to back away and try get it on the half-volley, then to hit is as hard as I could.”

Asked what was most pleasing about the short tour, he said:

“I think the young guys stepping up has been the most pleasing thing of all. Harry [Tector] has played really well throughout the series, Gareth has bowled well in a couple of games and got 37 there in the last game, so that’s pleasing for him to score against a very good side – to show that he can play at this high level.”

“Youngy has bowled well in the last six T20s especially – the three in the West Indies and the three here in India. I think the team aspect is very pleasing, we have a nice top five now, but the big thing now is for us to continue as a batting group and get our number 6, 7 and 8 into positions where they can add huge value to the team. That’s going to be a big thing, especially for me as a senior player, to give the younger guys some knowledge and try to help them along, to try and help them to step up and really contribute to putting Ireland into big winning positions or chasing scores when batting second.”