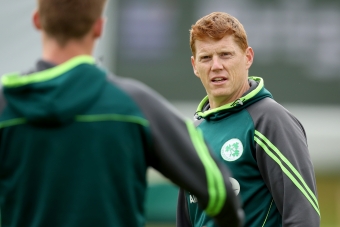 DEHRADUN – The last few days have brought mixed fortunes for Kevin O’Brien - undoubtedly one of Ireland’s finest-ever all-rounders, his recent personal achievements in the T20I series against Afghanistan have been balanced by the teams defeat in all three matches, however the 34-year old Dubliner is in a contemplative yet optimistic mood.

O’Brien made his international debut in 2006 – part of the legendary Irish side that defeated Pakistan in the 2007 World Cup, he rose to global cricket stardom in 2011 when he hit the fastest century in World Cup history, leading the men in green to victory over England in the process. O’Brien once more etched his name in the Irish cricket history books last year when he registered Ireland’s first-ever Test century in his nation’s maiden Test match. He has made more than 320 appearances for Ireland, making him Irish cricket’s most capped player, but is looking forward to the challenges still to come.

Almost by way of example of his mindset, asked the this week by a journalist whether the team were disappointed to be missing out on the World Cup this year, he responded:

“It’s almost a year since the qualifiers and while we were disappointed at the time I think to still be thinking about it a year later wouldn’t be very constructive.”

For O’Brien, his eyes are firmly fixed on the task at hand, and the challenges to come.

“Fordie [Graham Ford, Head Coach of Ireland Men] has coached all over the world and has started to try and identify the next generation of international players. It’s a changing time for the squad but we are adapting well to it.”

“It’s disappointing to lose three-nil here, although Afghanistan are a very good side. We acquitted ourselves well in periods of all three games - especially with the ball in game one, and in the run chase in game two and three. We probably just lacked a little bit of experience towards the end of both innings’, but we’re certainly gearing up for bigger things in the future - especially with the T20 qualifier in October. We’re starting to put some good things in place.”

“Stirlo [Paul Stirling] stood in well as the T20 captain - he demanded high standards, and having played under some excellent captains over the years in franchise cricket, he has taken some tips from them and has his own style.” One of Stirling’s most successful moves as captain on the tour has been to elevate O’Brien to a new role as opener alongside Stirling himself. O’Brien said:

“I love batting at the top of the order. I have done it for franchise teams in the past and had some success. I think our performances in the past in T20 needed a change, and hopefully this move       continues to be a successful one.”

“The best place to bat is at the top of the order, especially in the powerplay when you’ve only got two men out. With myself and Stirlo it’s been all or nothing - we’ve got off to some flyers in the powerplay and one of us has always gone on to put in a big score. Not the match winning hundreds we’d like, more seventies and eighties, and with Paul the 90 he got the other day. Hopefully we can continue to have a good partnership and continue to be successful.”

About the forthcoming one-day international series against Afghanistan, he said:

“We’ve got to go in fresh, but still take in what we’ve learnt from the T20s with the bat and ball. Their squad is very similar in that they have 4 or 5 guys coming in and it’s important we learn quickly from this experience and try to implement it in the 50-over game. It’s a format in which we’ve been more even with Afghanistan and we’re looking forward to getting started on Thursday. We’ll rest up today then be back training on Tuesday, then look forward to an exciting series.”

The Ireland Men’s team is in action on Thursday in the first One-Day International against Afghanistan. A livestream will be available, with details posted on Cricket Ireland social media channels when confirmed.

Hear a recent interview with Kevin O’Brien on The42.com about his career and hopes for the future.