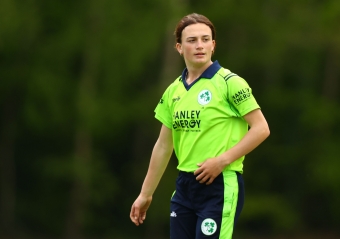 Lara Maritz bowling against Scotland in May

DUBLIN – Ahead of next week’s four-match T20 International series against Netherlands, Ireland’s Lara Maritz has been talking about the upcoming fixtures, her time in Australia - and her ambitions for her game and for her development work in the sport.

Speaking ahead of training, Maritz said:

“Running back out on the field in an Irish jersey back in May after such a long wait actually felt pretty strange at first. I had been in Australia for 18 months at that stage, so meeting up with the squad which featured some new faces was a strange feeling - but a great feeling. It’s such a privilege to play for your country and you have to use every opportunity given to you. That feeling I guess came through in the first game of that series [Ireland lost] but we soon regrouped and won the series well.”

“It’s slightly strange, but I feel like I am senior member of the squad despite being still 20. I have a job to do for my team, and I have gained a lot of experience playing at a World Cup where I learnt so much playing alongside the likes of Ciara Metcalfe, Clare Shillington, Isobel Joyce and Cecilia Joyce – it was such an honour to get that opportunity before they retired. They knew so much about the sport, and just observing the work ethic of a player like Isobel helped a lot.”

“This upcoming series is very important for us as a young team. We played well against Scotland and have worked really hard on our fielding, and I think that has opened a lot of eyes for our young team. We meet Scotland and Netherlands again in the European qualifiers next month so having these two series under our belt can only be good for us. Having Mary Waldron and Eimear Richardson back as well is a great bonus.”

How was her time in Australia?

“My time in Australia was amazing. I went over in September 2019 and returned in March 2021. It was longer than expected, of course, but what an experience it was. My goal is to become an all-rounder for Ireland, so I put in a lot of hard work in Australia, particularly into my batting.”

“It was a great experience to play at the WACA and learn from the best over there. I initially went over as part of the ICC Development Team, where I had the opportunity to learn skills from the likes of Megan Schutt and train with Sophie Devine - that was pretty special. I was also given the opportunity to play an inter-squad match with the Western Australian side, which was also a huge learning curve for me.”

Congratulations on your new role as Development Officer in the Fingal County Council region – what does that entail?

“One of my main aims is to work with the local schools around the Fingal area and I am thankful to Brian O’Rourke for giving me an opportunity to start working on this. I grew up here, but I feel like there is a missing piece - we just don’t have enough kids playing the sport and staying in the game. The age group between 13-18 years is very important, and we need more support and structure around this age group to help them continue to love the sport. If they can’t see opportunities, they leave the sport behind. I believe a clear pathway will help them see that there is a structure in place for opportunity. I’ve only recently started this job, so there is a lot of work still to do on my behalf, but that is my ambition for the next few years.”

This will be the second T20I series at home in 2021 for Ireland Women after their 3-1 series win against Scotland in May at Stormont.

Netherlands was the first international side Ireland Women faced in their maiden internationally-capped match in 1983 (a One-Day match won by Netherlands). In the T20 format, Ireland and Netherlands have met 8 times in women’s T20Is, with Ireland winning on 7 occasions, and one no result. The two sides are heading to Spain for the T20 World Cup European Qualifier - where Ireland, Scotland, Netherlands, France, Germany and Turkey will battle it out for one spot in the T20 World Cup global qualifying tournament.

There is free entry to the matches, however, a cap of 200 spectators per day has been applied to this series by health authorities.

The matches will be livestreamed via Cricket Ireland Live on Youtube and livescored via the Cricket Ireland match centre. Permitted spectator capacity will be advised closer to the series.