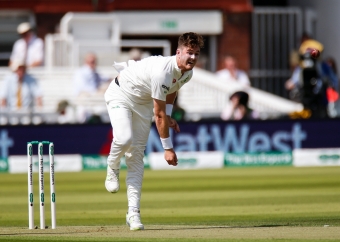 MUSCAT – In December 2018, Mark Adair received an email advising of his selection for the Ireland Wolves tour to Sri Lanka. Little did he realise that this email would be the beginning of a rollercoaster year that would see him burst onto the international stage against England in an ODI, open the attack at Lord’s in a Test match, and now has him on the verge of leading the Irish attack at the ICC T20 World Cup Qualifier.

Adair, 23, has been on the Irish selectors radar since 2013 when he was offered a trial with Warwickshire County Cricket Club. After 5 years on Warwickshire’s books, Adair returned to Ireland to play in the Test Triangle Inter-Provincial Series for the Northern Knights in 2018. He performed well enough to earn a spot on the Wolves tour.

Speaking from his hotel in Muscat, Adair looked back at that time:

“Yeah, it’s been a very big year. In January I was out in Sri Lanka with the Wolves. Unfortunately I missed out on the subsequent senior squad’s trip to Oman and India, which was disappointing at the time, but things can change quickly, as they did, and I haven’t looked back.”

Missing the Oman series and Afghanistan series in early 2019 only served to re-double Adair’s resolve to strive for international honours, and early provincial season form saw him make his much acclaimed debut in the One-Day International against England at Malahide (his debut cap was presented on match day by the former international Niall O’Brien). Coming in at number 8, Adair struck an aggressive 32 from 30 balls – including two massive sixes of Tom Curran in one over, and swatting Jofra Archer to the boundary to the cheers of the Malahide crowd. He then delivered a fiery spell of bowling that gave a glimpse for fans of his all-round potential at this level.

How good were some of Mark Adair’s shots earlier?

Adair maintained his place through the ODI Tri-Series in May against West Indies and Bangladesh, but it wasn’t until the two-match ODI series against Afghanistan that followed that he started to relax and results followed. His bowling returns of 4-19 and 3-71 demonstrated his wicket-taking abilities with the white ball. This was further reinforced by his 10-wicket haul over five matches against Zimbabwe in July (that included two 4-fers), but all paled in comparison to his next international outing.

In just six months, Adair had gone from bowling in Sri Lanka with the Ireland Wolves to standing at the top of his mark running into bowl from the Pavilion End at Lord’s Cricket Ground in a Test match.

Returns of 3-32 and 3-66 cemented fans belief that Ireland had found an all-round talent who could deliver on the big stage.

Come September, Adair was leading the line in the T20I squad as well, and although part of an ultimately successful campaign, Adair was quite grounded in his reflection of the squad’s performance in the GS Holding T20I Tri-Series:

“The Tri-Series was good, and it’s been good to focus on T20I cricket for a while, but I don’t think we put a complete game together during the series. We didn’t bowl well and bat well in the same match, but we did a lot of good things throughout. It would have been nice to have gone unbeaten, but it was great to get that final win. Probably our biggest takeaway was that we needed to improve on closing out both with ball and with bat.”

While a rollercoaster year so far, Adair acknowledges that having the experienced captaincy of Gary Wilson at both provincial and international level has aided his rise:

“Gary’s captaincy has been good - he adds a great deal of experience to any team he plays in and that’s certainly something that has helped me.”

“You can bring in all the new players you want, give them a go and have an exciting young team, but you can’t replace experience quickly. So having the likes of Gary and Kev [O’Brien] - even Stirlo [Paul Stirling] and Bal [Andy Balbirnie] – around is great. There’s a lot of cricket between them for you to draw upon. And most importantly, Gary’s got that bit of a cool head, that really helps when your skipper has that approach. He’s pretty hands off once he gets to know and understand you as a bowler or a batter. He allows you to play your own way, which is really appreciated.”

The Ireland Men’s squad has one more T20 International to play in Oman against Nepal tomorrow, before heading to Abu Dhabi where they will compete in the ICC Men’s T20 World Cup Qualifier.

"I wish you all the best today my friend. Enjoy it, you deserve it!" - @niallnobiobrien presents Mark Adair with his ODI cap.