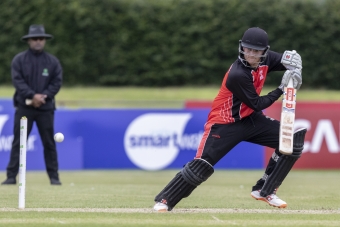 CORK – On the eve of his team’s trip to Bready for the latest Test Triangle Inter-Provincial T20 Festival, New Zealand-born captain of the Munster Reds Jeremy Benton, talked about his cricket career, his time playing cricket in Ireland and his hopes for the Festival ahead.

Benton first played club and inter-provincial cricket in Ireland in 2018. The 24-year old all-rounder believes that the T20 Festival format is an important showcase for the game and the local talent, particularly stressing the talent both within the Munster Reds squad and the local Munster region:

“I’ve enjoyed my time with the Reds, both this season as well as last. To play with guys such as Yak Ali and Max Sorensen who have been so successful in Ireland over a long period of time as well as future prospects such as Jack Tector, Stephen Doheny and David Delany has been awesome. I have been fortunate enough to have two good years at Cork County Cricket Club where you get to play against your Munster Reds/Munster Heat teammates too which is a good challenge.”

“The T20 Festival format though is a great opportunity for players such as these to play competitive cricket against Ireland’s best. With the Munster Heat’s success in the Leinster competition, it shows that there are quality cricketers in the Munster region. Players such as Senan Jones, Aaron Cawley and Diarmuid Carey have great potential which will hopefully be seen as the Reds play more Inter-Pro cricket in the future.”

“In the lead up to this Festival, the Munster local boys have been training down at Cork County with Ted Williamson, as well as with members of the Munster Heat T20 Side. We’re really fortunate with the decent facilities at the Mardyke Ground, which has helped us work hard on our T20 skills. Unfortunately the full Reds squad is not able to have full team sessions together in between festivals – it isn’t ideal but just shows how good the team is at assembling on a match day and putting out a decent display on the pitch.”

“A few boys are involved in other Inter-Provincial teams in other formats, but hopefully in years to come the Reds can have a greater involvement at this level as I think it will make a positive difference for the Munster Reds results on and off the field.” Image: Benton bowling at the recent T20 Festival at Pembroke

The Reds were perhaps the surprise packet at the last Festival, almost toppling the defending T20 champions Leinster Lightning and competing strongly against the in-form Northern Knights. Benton said:

“The Lightning game - what a game that was! Obviously we were a bit gutted with the end result, but it was cool to be a part of and full credit to the Leinster lads on getting it over the line. Matt Ford played a fantastic innings as well as Kevin O’Brien at the top. Our top three, Cormac Hassett, Jack Tector and Stephen Doheny all batted really nicely and put a great total on the board. Max [Sorenson] was awesome with the ball along with all the other bowlers, so it was pleasing to put a performance like that on the board.”

“With the Knights, what can you say, they are a class team and will be tough to beat in Bready. We got off to the perfect start and had them about 100-5 or so at one stage. But [Mark] Adair and [Stuart] Thompson played some impressive cricket at the end of their innings and got them up to 167. For us, JJ Garth, Eddie Richardson and Maxy [Sorenson] again bowled brilliantly and I thought we were in with a real shot, but the way the Knights lads bowled showed why they’re top of the competition.”

“We’ll be going into this Festival positive, but will take it game by game. The festival format benefits us as the boys get to spend extra time with other and gel nicely as a unit. While we will discuss a few targets, plans and the style of game we want to play, off the back of a couple of wins last year and our performances at the Pembroke festival this year, we will look at ways to build on these and play our own brand of cricket.”

While Benton has played two seasons in Ireland, he is still very much involved in New Zealand cricket, and has enjoyed some international action of late:

“I have been fortunate to have been involved with a few Test matches with the Black Caps over the past couple of years. I’ve been on the field for a few times as a substitute fielder, and it was cool to be called upon in Wellington this year for the Test against Bangladesh. While the first two days of the match were rather wet, definitely the highlight was seeing [Ross] Taylor score 200 and [Henry] Nicholls batted really well for his 100 - it was nice to be able to run the drinks for that. During the game Kane Williamson and BJ Watling both picked up injuries which meant I was required for a couple days in the field. I have to say that the team environment was very welcoming - I have played with or against most of them which made it easy to slip in. But it’s pretty awesome being in the changing room seeing how they go about their work and seeing how down to earth all the team is.”

And what about that World Cup Final?

“I was pretty fortunate and got over to the majority of the Black Caps games - including the semi and THAT final. They played some awesome cricket throughout the tournament and was great to see them at the Lords against England. I guess it was such a tight match that it’s a bit tough to think about now, but definitely loved watching them play and do so well on the big stage. Hopefully they will come up against Ireland in the 2023 World Cup!”

The T20 Festival will take place from 16 to 18 August 2019 at Bready Cricket Club, with each of the six matches being livestreamed via Cricket Ireland’s Youtube channel.