Interview: Niall O’Brien - from behind the stumps to behind the microphone 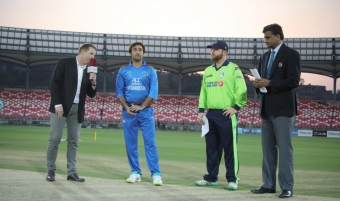 DEHRADUN - Viewers of the recent Ireland v Afghanistan T20 International series may have heard a somewhat familiar voice in the commentary box – none other than former Irish wicketkeeper-batsman, Niall O’Brien. O’Brien spent 16 years behind the stumps for Ireland, but now occupies a new position – behind the microphone and he is greatly enjoying his new role that is becoming a truly international journey.

“I have always had one eye on working more in the media field – even during my playing days. I had been doing bits and pieces for 7 or 8 years, if and when my county and Ireland commitments allowed. So it was certainly in my game plan to have some irons in the fire, as it were, to ensure a smooth transition into the commentary box.”

“I really enjoying watching the game unfold from the box and seeing the plots and sub-plots develop as opposed to being in the middle and caught up in the emotions of a game.”

“Having the opportunity to work on the Ireland v India T20 internationals at Malahide last summer was wonderful – 30-plus degrees, a full house, and the world’s best team entertaining the masses was an amazing experience. I also got to work with Indian legend Sunil Gavaskar who is extremely highly regarded in the industry.”

“Closely behind this was the Bangladesh Premier League [BPL] final – it was absolutely massive to work on. The crowds were brilliant and I was so warmly received by the supporters who still remember innings’ I played for Ireland way back in the day.” Asked about his style and approach to commentary, O’Brien said:

“I certainly want to be my own person in my work and would hope that I can develop my own style over time, but in terms of influences, I always loved listening to Richie Benaud growing up, and Nasser Hussain is a current commentator I have great respect for. My general approach is to be as relaxed and jovial as possible, but at the same time be precise and to the point with my information and thoughts on what is unfolding in front of the viewer.”

“When I am going to a tournament like the BPL or a series like this one, I do my homework on the players that will be participating – you can’t fudge your way through. There are plenty of the overseas guys I will know very well on a personal level, which is a great help as it gives me close access that most cannot get. For local guys It’s a case of checking their stats and form and speaking to local players whom I know or coaches. In addition, we are blessed in with great statisticians in the commentary set-up to help things run smoothly.”

“The commentary world is vastly different to playing as part of a team - lots of commentators would keep in touch of course, like Alan Wilkins and Danny Morrision, but it certainly isn’t like being part of a close-knit squad. But there is always some good craic in the box, particularly with the likes of Danny, who is a laugh a minute. He often comes out with sayings and quotes that if anyone else tried to would just sound stupid - but he seems to make it work.”

“I haven’t really set any specific goals, but would love to work full-time in the media in the future. I don’t see myself stopping at cricket, to be honest, my ambition is to develop to be good enough to host shows in other sports, like football or rugby. At the moment, however, days off are few and far between balancing the commentary work with my commitments at the sports agency. But it has been great that I have stayed within sport post-retirement.”

Niall is featuring as part of the on-air commentary team covering the Ireland v Afghanistan series in India. Fans can watch the series through livestreaming via this Youtube Channel.