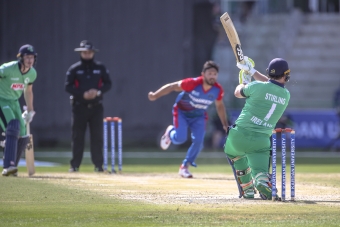 LAHORE, Pakistan – Irish international Paul Stirling has arrived in Pakistan after signing for Islamabad United in the Pakistan Super League and talks about his eagerness to experience one of the world’s best T20 franchise competitions.

Stirling is in the form of his life, scoring three centuries in five ODI matches in the recent tour to the UAE with the national side, and being shortlisted for the inaugural ICC Men’s Player of the Month award.

Whilst he has played in various T20 Franchise competitions around the world, this will be Stirling’s first time to play in Pakistan’s tournament.

“I can’t wait to be in Pakistan for the first time in my career. I’ve heard so many great things about the culture and the people. Fingers crossed that even if we are under certain rules due to COVID that I can still get the authentic local experience. I’ve been looking to tick this great cricketing nation off for a while now so I’m excited to get going in what should be a brilliant competition.”

“The PSL will be the most high profile franchise competition I’ve been fortunate enough to participate in, and I’m looking forward to seeing what it’s all about. I remember watching, as a kid growing up, the test matches and ODIs in Pakistan, so to get the chance to play in two of those venues would be an amazing experience along with playing with and against some brilliant local and overseas talent.”

“After quarantine, I’m looking forward joining up with the Islamabad squad – hopefully, we can get off to a good start in the tournament on Sunday night and make it through to the knock out stages in Lahore further down the line, but that is a long way off just yet.”

With an Islamabad United squad featuring the likes of Alex Hales, Faheem Ashraf, Fawad Ahmed and Shadab Khan, Stirling believes the squad has the talent to succeed:

“Islamabad have a brilliant record at picking up trophies in their previous PSL campaigns, however, every new season you have to start again from scratch and perform. There’s no doubt that the talent is there in the squad but cricket is not played on paper, over the course of ten group games if we play to our potential then we will be in with a chance to go all the way.”

“There’s so much talent and experience in the squad and players who are at the peak of their game so it’s an exciting bunch to get involved with. I’ve been fortunate to play against a lot of the Pakistani players internationally and in franchise cricket so I’m glad that I’m in their team for a change!”

“Alex [Hales] has been on fire recently and there’s no doubt he will continue that form on into this competition. I’ve been at the receiving end of his firepower in the past, so it would be nice to be at the non-strikers end to spectate if the opportunity arises.”

Islamabad United’s first match is on 21 February 2021 against the Multan Sultans. Fans will be able to watch the tournament via Sky Sports in Ireland / UK.