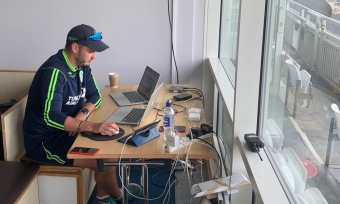 Scott at work during the recent England Lions game at Southampton

SOUTHAMPTON, England – While Ireland Men’s cricket team is set to take the field on Thursday against England, one man has been working hard behind-the-scenes – in front of several screens – recording, compiling and feeding data, video and analysis to the players as they prepare for the three-match one-day series. Meet Scott Irvine, Ireland Men’s National Lead Performance Analyst.

Scott, 26, hails from Belfast and has been involved with the national team since May 2014, but was appointed full-time Performance Analyst in January 2017. He has since travelled the lengths of breadths of Ireland, and to numerous countries around the world recording and analysing every ball bowled in an Irish international men’s match. If this wasn’t busy enough, he also covers the analyst role for the Test Triangle Inter-Provincial Series and Ireland Wolves games too – logging hundreds of hours of action, tagging every ball with his analysis software.

The role has also included scaling often precarious ladders and scaffolding to mount his cameras to capture the action.

When the television cameras pan to the Irish dressing room during a match, you often see Scott with his head in his laptop tapping away at the keyboard, but that is likely to be the only time the hard-working analyst is in the public spotlight as he codes ball after ball, over after over, match after match.

Speaking from the hotel within the bio-secure venue of The Ageas Bowl, he was discussing his role:

“As the National Lead Performance Analyst I am responsible for any consultants, interns or coaches that are providing performance analysis support to our many squads. Personally, my main work is with the Senior Men’s side, Ireland Wolves and Men’s Inter-Provincial Series.”

“I was very fortunate to have a placement year with Cricket Ireland back in 2014 while studying Sport & Exercise Science at Ulster University. As part of this course I undertook a Performance Analysis module and went on to do my thesis on ‘Key Performance Indicators and the effect they have on T20 cricket’ - thankfully I got a decent mark!”

“I was then kept on as a consultant whilst in my final year of university and moved into a full-time role once I completed my degree.” And what makes a good performance analyst?

“Good concentration for sure. Coding every ball of a 104-over day of Inter-Provincial cricket would challenge anyone. But I think having a real passion and enjoyment for the work you do is massively important.”

“As with many roles, the work is very time-consuming and at often quite unsociable hours, but perhaps what is slightly different with analysis is that a lot of the work you do will never be seen by anyone else. There’s also no way to cut corners in this role, and the day a player or coach asks a question that you don’t have the answer to, your credibility drops massively.”

“There have been many successful analysts that would say they don’t have an intimate knowledge of a particular sport, but I think in cricket it certainly helps. That knowledge allows you to provide more detailed analysis and allows you to filter the information you share with coaches and players.”

What would a typical day on the job be like?

“On tours, or in series, we work very closely, with the specialist batting and bowling coaches in particular. A lot of focus is around discussing or refining notes, videos and match-up information on our opposition teams. There will, of course, be additional requests on top of this, be it in preparation for games or when in training. This may include extra video or statistical opposition info or some old footage of a players own game.”

“If there are no training sessions or domestic cricket, a lot of my time is spent analysing and reviewing a previous tour or preparing for an upcoming series.”

“Outside of matches, a lot of time is spent in coffee shops going over info with players or coaches. Training days on tour don’t often call for much video or analysis work, so I’ll often fill in as an extra pair of hands: grab a mitt, hit a few catches, sidearm or chuck a few offies!”

And what are some of your more memorable moments and memories in the role?

“Our first men’s Test against Pakistan in 2018 was such a memorable occasion, but I don’t think it can be anything other than that morning at Lord’s. Everything from standing out on the pristine outfield, walking through the pavilion or those unbelievable lunches – unfortunately, it probably has one of the worst views for the analyst in cricket!”

“Then there was the time I nearly had my camera pinched by a monkey during an Ireland Wolves game in Sri Lanka. I assumed it was the wind as the camera began shaking and ended up pointing to the sky - the next think a monkey’s nose was staring down the lens. Thankfully the camera was securely clamped down!”

Came across a new camera issue yesterday… appears a monkey tried to pinch it!  @Irelandcricket pic.twitter.com/fbmxnJjr8h

“But all up, I will always feel very fortunate to visit different countries as part of my job. However, for every tour to the Caribbean, there’s a tour to somewhere far less glamorous. We go on some long and difficult tours, so it definitely helps that the players and support staff get on very well. It can be tough spending half the year in hotels and away from friends or family, so it’s always nice to get a bit of time at home with our ‘home comforts’.”