INTERVIEW: Shane Getkate’s fondness for Muscat and bowling that last over at Malahide 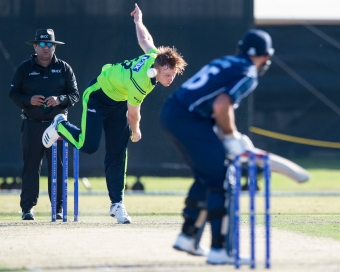 Getkate bowling in Oman in early 2019

MUSCAT – 22 degrees. That was the temperature differential that Ireland’s Shane Getkate and his team mates are dealing with. A few days Monday Getkate a left a chilly 14-degree day in Belfast and soon after stepped off a plane into the 36-degree heat of Oman. Such is the touring life of an international cricketer, but a life that the 28-year old all-rounder says that he is enjoying immensely.

Getkate is part of the Ireland T20I squad which is playing a pentangular T20I series in Muscat. He made his international debut almost eight months to the day at the same ground in Oman and has now appeared 13 times for Ireland.

One of Ireland’s break-out players of 2019, he was recently hailed for his bowling performance at Malahide when he was asked to send down the last over in the ultimately dramatic, series-winning final T20 International against Scotland last month.

Such was the intense interest in that last over that the global viewings of the match livestream surged past 1,000,000 views, with more than 70,000 concurrent viewers watching Getkate hold his nerve and bowl the last three balls. But the attention and global exposure hasn’t phased Getkate despite his still relative newness to the senior Irish ranks. Speaking from the training ground in Muscat he said:

“The recent T20 Tri-Series in Malahide was perfect preparation before a big qualifying tournament, as it allowed everyone in the squad to get stuck into their specific roles. Winning the tournament was great as I don’t think we’ve won a T20 Series at home for a few years. While we showed great fight in all of the games, and some of the young lads really stuck their hands up, as a group we were focussed on continuing to get better game by game going into the Qualifiers.”

“It was a great experience bowling the last over and special feeling to get the win. The boys brought it back superbly with the ball to give us a sniff in the last over. I thought the games being streamed throughout the week was great for people to see across the board. That being said, as a player you know that T20 cricket is a game of small margins and it could have easily gone the other way for myself in the end.”

WATCH: We’ve given you just over 24 hours to catch your breath after that finish on Friday. Now re-live @ShaneGetkate’s final three balls against Scotland. #Tense #NailBiting #BackingGreen
pic.twitter.com/tCPiVYIH0a

Oman holds a special place in Getkate’s career so far:

“We toured Oman back in February with the seniors before the Afghanistan series in Dehradun. I have extremely fond memories from my time in Muscat as I made my international debut against Oman in the first game. Receiving my first cap from Paul Stirling was a proud moment.”

2019 has been a big year for Getkate – starting in Sri Lanka on the Ireland Wolves tour, he will end the year being part of the World Cup Qualifier squad:

“I suppose at the start of the year I didn’t look too far ahead, but at the same time if you had said to me before Sri Lanka I would play for Ireland in both T20 and ODI cricket in the coming year, I would have bitten your hand off.”

“The Wolves trip to Sri Lanka was a tough but enjoyable one. The opposition were very strong and exactly what we needed as a group to push forward and better our skills for the year ahead. I felt pretty relaxed going into that trip after spending some time pre-Christmas in Cape Town working on my game. It was great to put in some performances in Sri Lanka and get rewarded by being included in the senior T20 squad.”

Getkate also acknowledged that the leadership and experience of his inter-provincial and T20I captain, Gary Wilson, had played a major role in his performances this year:

“I think it’s been great to have Gary [Wilson] leading the Northern Knights this season. He brings great experience and sense of calmness with his leadership as a captain. I think he gets the balance quite well with understanding what skills you can bring to the table, whilst matching that with what is needed to suit the situation or conditions on the day. Playing under his captaincy for Ireland has been no different.”

And how does he pass time on long tours like the current one?

“I’ve started to get back into golf this year - a lot of practise is needed on my game, but I feel it helps me switch off from cricket. Besides golf I like to read or head out and about and check out what the city we’re staying in has to offer.” Image: Getkate bowling in an ODI against Zimbabwe in July 2019

The Ireland Men’s squad has arrived in Oman where they will play four T20 Internationals. The squad will then head immediately to Abu Dhabi where they will compete in the ICC Men’s T20 World Cup Qualifier.