Interview: William Porterfield looks ahead to one-day series and the role spin will play 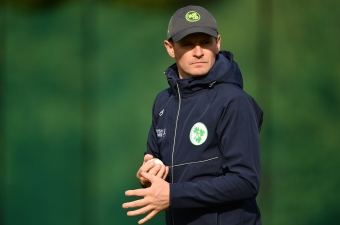 DEHRADUN – Rain can be the cricketers curse, but as a stereotype you wouldn’t expect it to be a hindrance in India. But rain it did today, and while the Ireland Men’s cricket team sat out training due to the downfall, Ireland’s long-term captain William Porterfield spoke about the upcoming one-day international series.

After stand-out performances at under-age levels, and having led Irish sides since Under-13s level, Porterfield made his senior international debut in 2006. He has amassed over 280 caps for the national side, with almost 240 of these as Ireland’s captain, having taken the captaincy reins from Trent Johnston in 2008. In 2018, Porterfield made the decision to step back from captaincy duties in the T20 format, seeking to concentrate more on one-dayers and the Test arena.

Asked how the squad is looking ahead of the five-match one-day international series against Afghanistan, he said:

“There’s a few of us coming into the squad, five of us who have been here for a week and that helps freshen things up from that side. Afghanistan are a tough team in T20 cricket, but we’re together and fresh for the one-day series and looking forward to it.”

“Over the last few matches we played some good cricket at various stages in the game - Afghanistan are a strong T20 side a there were a couple of good match-winning performances from a couple of their lads, which is what it’s about in T20 cricket. If an individual comes off like that it can be hard to stop the momentum, but our lads had some good performances, and it was good to sit down and chat with Fordie [Head Coach Graham Ford] from the sidelines.”

A number of new faces have emerged in recent times, particularly off the back of the recent Wolves tour to Sri Lanka. About this, he said:

“One of the biggest things we’ve been crying out for is more games of cricket in general, and the Wolves programme is massive. It’s what is required to take this team on in international cricket - but a Wolves programme with not just a high standards of cricket but a high volume of it as well. It’s what the lads need - as we’ve seen over the last few years the gap between domestic cricket and international cricket is there and we need to bridge that. The Wolves programme is a massive way of doing that, and lads who go well in that and put their hands up will get opportunities in the next while.” Image: William Porterfield in action against Afghanistan in 2018

With the Irish one-day squad featuring up to five spin options, Porterfield considers the role of spin as the series progresses to be central, but doesn’t downplay the important role of seamers:

“We are playing nine games across the same block, and they’ve cut the pitches for even the Test match already, so I think it’s going to be quite dry. But in these conditions our seamers have played a big part for us - we beat them in Sharjah [last year] with our seamers taking 8 or 9 nine wickets a game. So, I think you can’t rule the seamers out, but having those spin options in your side is a good thing.”

“Coming from playing T20 cricket, you’ve got to realise how long 50-overs can be, and as much as you focus on the opposition, you have got to look at what you do well - individually and collectively. It’s no secret that anytime we’ve beaten Afghanistan we’ve negated their spin, and if we can do that over the next five games then we can be successful.”

With the tantalising prospect of Ireland’s first-ever overseas Test match on the near horizon, is he tempted to cast his mind ahead to that?

“There’s a little eye on it in that we know there is a Test match coming up, but in terms of what we do through the ODI series, it is purely and simply about winning that series. If we can win that series then we will focus on the Test match, but we won’t be looking at that until the series is done.”

The Ireland Men’s team is in action on Thursday in the first One-Day International against Afghanistan. A livestream will be available, with details posted on Cricket Ireland social media channels when confirmed.

Cricket Ireland can confirm that all-rounder Stuart Thompson has been added to the one-day squad as cover. Thompson is already in India, being part of the T20 and Test squads.