Interview with Craig Young: “when we get the chance we will come back stronger in the next game” 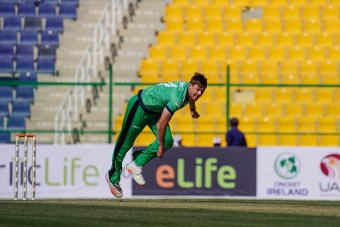 Young is ready for a better Irish showing

ABU DHABI – Ireland’s Craig Young admits to there being a strange atmosphere to the tour so far, but is keen to use the time to find his rhythm to be ready for the next match – whenever that may be.

The North West Warriors pace man has 63 international matches under his belt, but acknowledges that he was still shaking off a few cobwebs during the first ODI against UAE last Friday.

“There was definitely some clearing of cobwebs for sure. However, speaking personally, I’d wanted to have gone much better. It can take a while sometimes to find the rhythm I like when I bowl. Some people find it in the first net, some not for a week later. As a unit we could do better, although some guys did bowl very nicely. I’m sure when we get the chance we will come back stronger in the next game.”

“The pitch played quite slow, but as per usual the ‘top of off’ doesn’t move, and that’s where we would like to do better next game – to find that length and line quicker and settle in there. There wasn’t much lateral movement, but as the wicket was quite abrasive we hoped to get the ball to reverse later on in the innings. Unfortunately that didn’t happen in the first game.”

“So looking forward, we need to settle in and find that length to hit the top of off. If we find that, and try to stay in or around that, and build pressure that way then we are in business. The UAE batters like the scoreboard moving, so if we can bowl tightly and force them to look to play scoring shots off our best balls, then we will create chances.” That Young, 30, has been on numerous international tours since making his debut for Ireland in 2013, probably accounts for his adaptability to current circumstances and his determination to use the time well:

“It was a strange start to the tour - the three days of quarantine and the testing. Most of us, the second we land, are itching to get out and running around, not be cooped up in our rooms with too much time to think.”

“The last few days have been very frustrating not knowing if the games will go ahead, but we know we are very fortunate to be out here. For me personally, the training has been a chance to work on finding my rhythm. All the lads are putting the hard yards in as we all know how important the games on the horizon are. Fortunately the facilities are great, they are very similar to the types of wickets we will be playing on.”

“As for the bubble itself, it’s not as bad as it can sound. We get access to a pool in the morning, we have our own little spot by the beach and access to a gym for us only. Some of us have our Playstations and Xbox’s with us, other guys like to chill out with Netflix and reading.”