Interview with Ed Joyce: Malahide was an unusually emotional and nervous Test debut 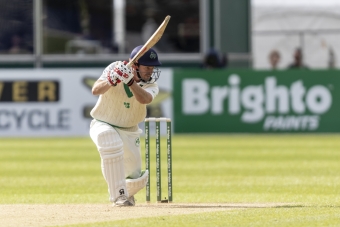 DUBLIN – A Test match debut is a major and often nerve-wracking life experience for any cricketer. Nerves don’t discriminate though as even Ed Joyce – a player with 150 international caps and more than 250 First-class appearances under his belt at the time – admits that overcoming the Pakistan bowlers wasn’t his only battle at the Malahide Test.

Today is two years since Joyce first walked out to bat in a Test match, how did he feel?

“Looking back at the first innings it was a nervous affair. Most people feel nervous going out, and I always did - even when I felt I was in good form. Personally, I hadn’t played a huge amount of cricket leading up to that match and didn’t feel in great nick at that stage. I didn’t have a great game plan and didn’t last that long obviously. The decision I got probably wasn’t the best decision you’d ever see either.”

“We soon found ourselves 3 or 4 down before Kev and Stirlo got us going a bit, then we managed to get out of jail a little - we got to a half-decent score that we could actually build on the next day. So, there were nerves all around, and maybe if you gave us another go at it and I think we would have done a better job.”

So, the first innings may not have been a great experience, but how did it feel to finally be a Test cricketer?

“When Whitey [Andrew White] handed me the Test cap before the start of the Test, I have to admit I was unusually emotional. I’m not usually someone who shows a great deal of emotion most of the time, and you never know how you’ll react to something like that until it happens.”

“There’s a nice picture of Whitey handing me the cap, and the big smile on my face says it all. There was a nice comradeship around the group, it was really a feeling of shared achievement – I obviously felt very proud for myself, but also for the team and the country being able to play its first Test match. Getting that cap was a big moment for me and a big moment for a lot of people in that group. It was a real ‘pinch me’ moment the whole four days we played - and, of course, it’s a wonderful venue Malahide as well.” Bowled out for 130 and asked to follow-on – how did you and William Porterfield approach the task when you walked out to bat on the afternoon of Day Three?

“We had a much better plan the second time around, and I got a bit of luck early on where a difficult catch to the keeper went down. But apart from that myself and Purdy [William Porterfield] had a really good partnership.”

“The two of us were looking to score, and we left really well – we seemed to know where our off stump was and didn’t go chasing too many balls. Once we got to 20 or 30 and got through that early bit we felt quite comfortable.”

“I think if we’d lost early wickets it might have been a tricky period for those coming in, so I was really proud of myself and William for getting through that evening and there was a big sigh of relief when we got into the dressing room at none down for 60-odd. It meant we had the whole next day to really put the pressure on Pakistan.”

Despite the first innings deficit, it looked a much more confident batting side the second time around. Was that the feeling in the dressing room?

“After such a nervous first innings there was a tense feeling, and the crowd was tense too – I was certainly as nervous as I’d been for a very long time going into bat that second time. But there was a real feeling of “we’ve got to dig in here, we’ve got to put on a much better show than the first innings” - and we did that.”

“That little period towards the end of the day set us up for the next day’s play, and obviously Kev played that magnificent innings the following day – as did several other people – and got us up to a score that we thought might be tricky to chase, and it proved that way.”

“We were much relieved, I think relief was the biggest thing. But it was also nice to begin feeling comfortable. I know we were only playing our first Test match but I got to a point where I felt I knew what was I trying to do and was comfortable in my game plan. I always played at my best when I had a good game plan and when my feet were moving well - you start to feel like they have to get you out rather than you making a mistake. It was just nice getting to a feeling of comfort during the game.”

Joyce scored 43 in the second innings in a 69-run opening stand with Porterfield. He announced his international retirement soon after the Test, and has since been appointed the Ireland Women’s Head Coach.