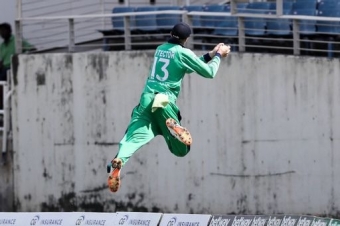 Tector diving to successfully to save a near-certain boundary (photo: Cricket West Indies)

KINGSTON, Jamaica – Ireland’s Harry Tector was speaking after yesterday’s first one-day international against West Indies, while an update on the status of the playing squad was provided this morning.

After a gutsy display, Ireland Men went down to the home side by 24 runs in a match that saw the advantage swing multiple times between the two sides. Tector featured in a 103-run partnership with captain Andrew Balbirnie that looked to put Ireland on track for a remarkable victory, but after the two batters fell within nine balls of each other, the West Indian attack drove home their sudden advantage and claimed a hard-fought win.

Speaking from the team hotel in Kingston, Tector said:

“We were actually feeling pretty good at the halfway stage. Obviously, whenever you’re chasing a score of 270 you’re going to need to bat well. We knew from the warm-up game - and early on yesterday - that the pitch was getting better and flatter. It wasn’t easy to bat on, by any means, but certainly it seemed easier than when they went out to bat first. So, we were pretty confident that if we could string a few partnerships together then we could go close.

“I felt quite confident out in the middle, I was quite well prepared, and I feel like I’m in a good place with my batting in one-day cricket at the moment. I got a bit of luck early on in my innings, but felt more comfortable the longer I was in. It was just so disappointing that that nick flew all the way to third man – it was a big opportunity missed.”

Asked what changed the momentum of the innings, he said:

“It’s obvious really. If you lose two set batters in the space of 8 or 9 balls then the pressure is going to be put on those coming after - we were facing good bowlers and they’re not going to be giving you freebies. I think the run rate required was around 7-an-over when me and Bal [Andrew Balbirnie] were in – and that is something we were doing as we were set. The mantle really fell to me when Bal was out, so it’s a bit gutting that I couldn’t get us over the line, but I guess I have to live and learn for next time I’m in that position.”

Asked what the team could take out of match one going into the next two matches, he said:

“There were a lot of positives – our fielding, particularly our energy in the field, was good. Before the game we spoke about bringing good energy, even when they were on top. Fielding is something we can control and we all work hard at it, to be as good as we can come game day.

“The bowlers bowled well up top and in the early middle overs, and the way the lads came back at the end was exceptional. To restrict them to 270 - when at one stage they were eyeing 300 to 330 - was good. Credit has to go to the bowling unit as preparation hasn’t been ideal and they probably feel a bit under-cooked going into the first game.

“With the bat, Bal is always so solid and it was great to see him do what he did. Andy McBrine looked good until the blow to his head – I hope he comes through well for game two. I’m sure with Stirlo coming back in and Purdy [William Porterfield] missing out this time, they’ll be hungry for runs next match. And, of course, it was good to see George and Sparky [Mark Adair] there at the end, but unfortunately we left them with a rate that was probably a bit too high when they came in.”

With Simi Singh and Ben White set to miss the entire series, and spin looking a good option as the series progresses, might we see Tector rolling the arm over at some point?

“Ha, we’ll see, maybe you will. I’d have to get some practice in on my bowling first – I’ve bowled before, but we’ll have to see if that need is there.”

Simi Singh and Ben White: while the team’s medical staff are still awaiting the results of their PCR tests after a service delay, it is likely both players will be out of the entire series after an antigen test on Friday night came back with a positive COVID result.

Andy McBrine: the spinner was struck on the helmet while batting yesterday and retired hurt. He will have follow-up assessments over the next 48 hours for a suspect ‘mild concussive episode’, although his symptoms are very minor. If symptoms abate and he passes his assessment tomorrow, he will be in line for selection in game two.

Paul Stirling and Shane Getkate: the pair had to isolate in Florida after testing positive for COVID. They are travelling to Jamaica today after testing negative yesterday.

All you need to know about the series