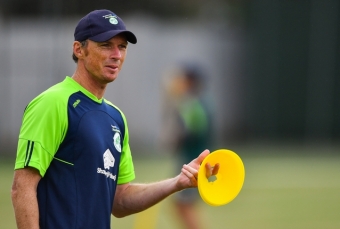 After his side’s 94-run win in the Plate Quarter-Final over Canada on Tuesday, the Irish Under-19s head coach was reflecting on the performance and looking ahead to the important clash that could see the Men in Green achieve automatic qualification for the next Under-19s World Cup in 2024.

“We’re very pleased with the character of the squad by bouncing back to beat Canada in the Plate Quarter-Final after two defeats against India and South Africa. I think the South Africa game could have been a lot closer had things gone our way with the ball early on, we had certainly put them under a lot of pressure and I think we made them play their best cricket to win the match.

“As for the last match, I thought it was a really great knock from Philippe le Roux – probably the best knock of the tour to date. Coming in at 34-3, then at one point being 90-7, he formed great partnerships with James Forbes – who fought incredibly hard – and then Muzamil Sherzad. They were key moments in the game for us. It was a brilliant knock by Philippe, who is only 17, I thought he showed a lot of maturity in how he played the innings to get us up over that total of 180 which put scoreboard pressure on Canada.

“We’re really pleased with the bowling unit on this tour, they’ve done well the whole way through. The Canada game was a good example where everyone with the ball played their part and we kept the pressure on throughout. Reuben Wilson has bowled really well, when he came in against South Africa he could really have had another few wickets on another day if he had had a bit of luck. He backed it up really well again against Canada. He has a smooth run up, repeatable action, hits the deck hard, gets some swing and movement, so he could challenge the best batters in the world on any day – and that’s really pleasing as he’s only 15, and we’ll have to manage him carefully, but he’s been brilliant this tour. He’s learning a lot and improving all the time, so we’re pleased how he’s going and hopefully his good form can continue tomorrow.

“The message to the squad going into the Zimbabwe game is to believe, first and foremost. We played a series against them there a few weeks back in Barbados and we won the last game comfortably. I think we have to carry that forward, just like we carry forward the win against Canada, so we have to go into the game with confidence – we know they’re a good side, we’ll have to play our best cricket to win the game.

“I think we need to focus on building partnerships, like we did at the back end of the Canada game, to either post a good total if batting first or being able to chase comfortably. In terms of the bowling, we have a strong bowling unit, and we talk about bowling our best ball as much as possible and putting pressure on the opposition as much as we can. But above all else, the message to the team is that we’re fully prepared at this stage, we’ve done all our work, and it’s really now about going out, enjoying it and expressing ourselves - and enjoying the last few days of the tournament. Then hopefully we’ll put in one of our best performances, finish strong and get that win over Zimbabwe which will get us into a Plate Final.

“A big factor at this stage of the tournament is teamwork. A team that can stay together from 1 to 16 is probably the team that will lift the Plate at the end of the day. We’ve done a bit of work around that – it’s been a tough tour, it’s been a long tour – the Covid restrictions have made it even tougher – but the buys are digging deep now to find that resolve and resilience to keep pushing through. If we can do that, and stay together as a team, then we have a good chance of going all the way in the Plate.”

The match tomorrow starts at 9am (local time) or 1pm (GMT) and can be watched in Ireland / UK on Sky Sports Cricket’s Youtube channel.

A full fixture schedule and match results for the event can be found here: https://www.icc-cricket.com/u19-world-cup/fixtures