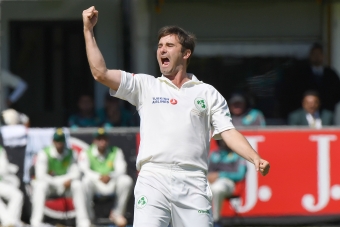 LONDON – Only ten men in over 140 years of Test cricket previously had the honour of bowling the first ball for their country in its debut Test match. Tim Murtagh became the 11th when Ireland Men played in the Malahide Test two years ago this week – and the momentous nature of the occasion only struck him as he was lacing up his boots to go out on the field.

Over the next eight years Murtagh appeared 97 times for the national side, claiming 142 wickets across all formats at an average of 25.54. Defying the career arc of most, it was remarked by many observers that he seemingly improved with age, and indeed 2018 was Murtagh’s best year for Ireland claiming 28 wickets in 11 matches at a miserly average of 16.32. Apart from the wickets, perhaps his most memorable moment with the ball during 2018 was when he delivered the first-ever ball for Ireland in men’s Test cricket at Malahide against Pakistan – which he spoke about today. Today is two years since Murtagh walked out to open the bowling on the last day of Ireland Men’s debut Test match – with a small target to defend, did he dare to dream of an upset win?

“Coming out on that last day I 100% believed that we had enough runs and that we could create some history. Obviously getting a great start was fantastic – to have them three down early was great.”

“Unfortunately we missed the chance to get them four down, which could have made a bit of a difference, but I remember saying to Purdy [William Porterfield] that you’re not taking the ball out of my hand here – it was a smallish target and either way the game wasn’t going to last too long, so I was determined to be bowling that whole time. I probably bowled as long a spell as I’ve ever bowled in my career either side of lunch on that last day to try and get us a win.”

“It wasn’t to be, but it was a special feeling to be in the hunt – the crowd got really behind us when we took those early wickets, and I think everyone sniffed that something special could happen. But Pakistan are a world-class team and with all their experience they got themselves over the line.”

Looking back, what is it like to know you’ll always be known as the player who bowled the first ball in Test cricket for Ireland Men?

“It’s incredibly special to tell people, and tell my kids when they understand, that I was lucky enough to bowl the first ball in Irish men’s Test history – it’s something that no one can ever take away from me and the 11 guys that took the field that day. It’s something that these guys will take forward through the rest of their careers, and so will I.”

“I always had a feeling that we’d be bowling first, but it wasn’t until that morning when I was putting my boots on that it suddenly dawned on me that I’d be bowling that first ball in our men’s Test cricket history – that’s when the nerves hit in, probably for the first time in my career. I was very nervous getting ready to bowl that first ball, but once I got what was quite an eventful first ball out of the way and we got into our stride, it almost started to feel like any other game.” And becoming a Test cricketer quite late in your career must have been a special feeling?

“Yeah, I think as Whitey [Andrew White] handed out those caps it was probably as emotional time for me as I’ve ever had in my career. I think there were a few tactical sunglasses put on that morning just to cover the eyes up, but the whole ceremony was special – they took us over in front of the hospitality marquee so our friends and family could witness it at close hand as well, which was a really nice touch.”

“To get that Test cap – and for it to come as late in my career as it did – was the culmination of a whole career’s work really. It was incredibly special, although unfortunately it wasn’t on the first day as that was washed out, but the whole ceremony was lovely and Whitey spoke really well – it was a moving occasion.”

Murtagh finished the match with returns of 4-45 and 2-55, claiming crucial early wickets in both Pakistan innings. He went on to star for Ireland in Test cricket again just over a year later when he claimed a remarkable 5-13 at Lord’s Cricket Ground against England in a Test match, before retiring internationally in November 2019.