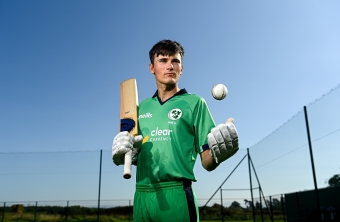 Tim Tector ahead of the Plate Final

After his side’s commanding eight-wicket win in the Plate Semi-Final over Zimbabwe on Friday, the Irish Under-19s captain was keen to credit the team ethos and performances of his teammates for the building confidence of the side, with the Men in Green successfully achieving automatic qualification for the next Under-19s World Cup in 2024, and are now in a position to win the Plate Final and finish the highest any Ireland Under-19s side has in the history of this tournament.

“We have a great chance tomorrow to finish ninth - it would be the highest an Ireland Under-19s team has ever finished at a World Cup. Coming into the tournament we were always looking at getting out of our group and into the Super 8s, but that didn’t go our way, and we had to quickly change our attention to the Plate - and that’s what we did.

“After that first win over Canada in the Plate, we focussed on bringing that momentum into the Zimbabwe game. We have been improving with every game, and now we feel we have a good shot tomorrow if we can continue our approach.”

Tector shared in an unbeaten 159-run stand with Jack Dickson yesterday, and gave some insights into their tactics:

“It’s never easy coming in after losing two early wickets, but you just have to knuckle down and grit it out for a bit. Jack and I thought that if we didn’t lose a third wicket quickly then there would be a good chance we could steady the ship and build a partnership. I was quite lucky when I got a free hit early on which released a bit of pressure, then not long after that I was able to hit another boundary. It’s those little things all help to release a bit of pressure and make you feel comfortable at the crease.

“We just looked at rotating the strike, looked to sweep hard when they were out, and to run hard and put the pressure back on them. We knew it wasn’t a big total to chase, so if the two of us could hang in there a while then there was a good chance we’d get there. With these Under-19s games, you know that the job is never done until it’s done, but when we got it down to 30 or 40 runs to go we sensed the Zimbabwe fielders go a bit flat. At that point, we focussed on knocking the ones around the field and running hard. They ended up giving us a few bad balls that we were lucky enough to put away.”

The skipper was keen to recognise the Irish bowlers for their contributions:

“Muzi [Muzamil Sherzad] and Humph [Matthew Humphreys] bowled really well for us in that last game. Humph got a few early on, including their captain, which was great. He’s bowled exceptionally well for us all tournament and been one of our strike bowlers right through since the qualifiers - he’s really shown his class in this tournament.

“As for Muzi, I was so delighted for him after all he’s been through to get here - to get a five-wicket haul for Ireland is an extraordinary achievement for him. And the whole squad couldn’t be more delighted for him. He came on and straight away hit his lengths hard, and then later on with the lower order he was able to execute his death bowling - his yorkers, bouncers and slower balls - so well.

“And Jamie Forbes, he didn’t really get the mentions that he deserved, but he really built the pressure during those middle overs. He’s been so good for us this tournament, he’s been on the money from his first ball of every spell.”

And what is his message for the squad tomorrow heading into the Plate Final?

“It’s great that we’ve qualified for the next world cup - there’s a few guys in our squad who will probably be going to that. I’m sure the lads will be a little nervous going into the Plate Final tomorrow, but they were delighted with the performance yesterday - as were all the parents who have travelled over to support us - so tomorrow is another chance to show the world what we can do.

“My message for the squad is that we’ve had a great few games - the last two wins have been reasonably comfortable, so to keep that momentum going. But we need to try to go out and enjoy the occasion. It’s our last match in a World Cup - we’ve all enjoyed every minute of the tournament, but it’s not every day you get to play in a World Cup, so we need to enjoy the occasion. If we give it our absolute best, hopefully, we can come out on top.”

The match tomorrow starts at 9am (local time) or 1pm (GMT) and can be watched in Ireland / UK on Sky Sports Cricket’s Youtube channel.

A full fixture schedule and match results for the event can be found here: https://www.icc-cricket.com/u19-world-cup/fixtures