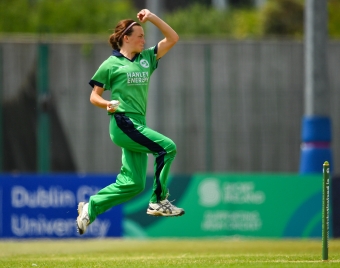 Lara Maritz will join the WGDS on Monday

PERTH, Australia – Ireland international Lara Maritz has been selected to join the ICC Women’s Global Development Squad that will see her play against some of the world’s best women cricketers and then spend time training with the Adelaide Strikers WBBL team.

The ICC Women’s Global Development Squad (WGDS), launched in 2018, is an initiative that aims to provide the opportunity for high-performing players outside the ICC Women’s Championship to develop their skills, ensuring women’s cricket continues to go from strength to strength.

Maritz becomes the fifth Irish player to be selected in the current WGDS programme, after Gaby Lewis, Shauna Kavanagh and Lucy O’Reilly (in 2018) and Celeste Raack (in 2019).

Maritz, 18, made her international debut in 2017 and has played 34 times for Ireland. She was already planning to spend six months training and playing club cricket in Australia before she received the offer to join the WGDS for two weeks beginning next Monday. Speaking from Perth, she said:

“I moved across to Australia last month with [fellow international] Rachel Delaney and am based in Mosman Park in Perth. I’ll spend the next six months playing for South Perth Cricket Club – training with the club, doing additional sessions with our coach and I working with the WACA Strength & Conditioning Coach in the gym. It’s a fantastic set-up and will really help develop my cricket. The club has been very welcoming and made us feel at home – a particular thanks to John Brenton who has helped us settle in quickly.”

“The opportunity to join the Women’s Global Development Squad while I’m here came as a surprise initially, but I’m excited to get started with that next week. I’m looking forward to training with, and playing alongside, some great players. It will be an opportunity to see how they train, and how hard they train to become some of the best players in the world.”

“There’s also the opportunity to meet new people and make new contacts around the cricket world, which is important in our sport.”

While just three weeks in Australia so far, Maritz is already seeing the benefits of the experience:

“We’re already into some outdoor training sessions - training on turf wickets, which is amazing as we don’t really get that back home. We’re training about three times a week, including sessions on Tuesday nights with the men’s firsts team. With the ability to do extra sessions with our coach, we’re pretty much hitting balls every day which is great.”

While still disappointed that the Irish team failed to qualify for the T20 World Cup last month, Maritz remains optimistic about the international side:

“While we didn’t qualify for the World Cup - which was pretty hard to take at the time - it was a great learning curve for such a young team. The experience I believe has made us stronger as a team. While we were disappointed, it’s not the end of the world as we’re such a young team. We just have to pick ourselves up for the 50-over World Cup Qualifier in July next year.”

“We also have a great coach in Ed to work with - he has such enormous cricket experience. The girls really get along well with him, he’s very supportive and a very positive coach. He really reinforces that it’s about keeping things simple - which is great advice as you can easily over-complicate things in cricket.”

“One of the main aims I’ve set myself while here in Australia is to work towards becoming a true all-rounder. That means working hard on my batting over the coming months - I want to show Ed what I’m made of with the bat when I get back home in April.” Image: Gaby Lewis playing for the WGDS in 2018

Maritz will fly to Melbourne on Monday and join up with her new WGDS team mates. Maritz will then fly to Adelaide to join the Adelaide Strikers to train and be part of the match day squad for the opening round matches of the WBBL. After her fortnight with the WGDS, she will resume her training and playing with South Perth before returning to Ireland in April next year.

The squad will start with a team-building and training session before playing six T20s in Melbourne and Hobart:

Read more about the WGDS here.