Interviews: Balbirnie and Porterfield on the bounce back in Game 2 and finishing strong 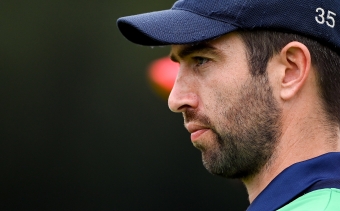 Andrew Balbirnie wants a strong finish to the series

BELFAST – Ireland captain Andrew Balbirnie believes Friday’s performance was a lift for his side and he is looking for a complete performance to finish the home season on a high.

Balbirnie hit a superb 40 in his last innings against the visiting Zimbabwean side as his side amassed 282-8 in a batting return-to-form by the top order. Looking at the prospect of squaring the series and claiming a vital 10 World Cup qualification points, Balbirnie and his side could only look on forlornly as heavy rain tumbled down during the innings break, leaving the outfield too wet to restart.

Balbirnie has captained the side 33 times since he took over the leadership role in late 2019, and is Ireland’s fifth-highest run-scorer in ODI cricket - and while keen to lead from the front, he is pleased with how his top-order bounced back after the loss in Game 1 of the current series.

“Yeah, it’s very pleasing how we played with the bat in the last match, which was a huge improvement from the first game. It’s exactly what we were looking for. I’m particularly pleased for Porty - he has been brilliant since he’s been back opening, and has brought a lot of stability and class at the top of the order.”

“Going into tomorrow’s last match, we are confident that we can get a result - it’s the last international game of our home summer, and we feel we can really end on a high and put in a complete performance.”

Meanwhile, opener William Porterfield says he felt good coming into the One-Day International series against Zimbabwe despite a lack of game time after the finger injury he picked up during the South African series in July, but feels rain robbed his side of 10 World Cup qualification points after a bouncing back with a superb batting display in Game 2.

Porterfield has amassed 4,301 runs in 144 ODIs for Ireland and has hit three back-to-back half-centuries for the first time in his career demonstrating he still has much value and experience to contribute to the Irish top-order in this format.

He struck 63 in the first match of the South African series before injury shortened his involvement in that three-match encounter, then has hit 75 and 67 in the first two matches of the current series against Zimbabwe.

“It’s disappointing we didn’t manage to get the full 100 overs in on Friday - we were in a pretty strong and confident position at the halfway mark. I think 280 on that surface was a little above par, so we were very confident we could go out and defend that. Unfortunately the rain hampered us.”

“In terms of personal performance, I haven’t had much game time but it’s been pretty good preparation spending time around the T20 squad - the whole build up and training there. So I felt pretty good coming into the series, the only thing I guess was about getting a bit of time in the legs - fielding for 50 overs and batting for a while in the middle is something you can’t replicate in training. But I felt pretty good coming in, and hopefully, I can carry that into Monday as there’s a big 10 points up for grabs.”

“The lads are feeling confident from bouncing back from the first game where we were a little bit off with both bat and ball. Again, it was disappointing not to get the win, but it gave the squad great confidence.”

The third ODI of the series is scheduled for Monday at 10.30am.