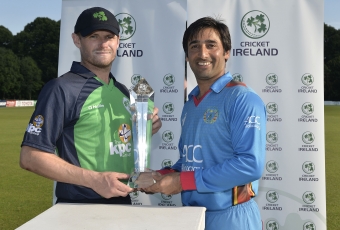 CRICKET IRELAND and the Afghanistan Cricket Board have announced details of a nine match series being held next March in India.

“This will be a great opportunity for the squad to test themselves in nine matches across three formats,” said Cricket Ireland Head Coach John Bracewell.

“Games between the sides are always competitive and I expect more of the same in this series. It’s always good for a team’s development to test themselves in different conditions, and there’s no better place than India to do that.

“I’m sure the younger players in particular will benefit from playing in sub-continental conditions and it will enrich their cricketing experience. It certainly promises to be an exciting month’s cricket and one which the players will relish.”

Cricket Ireland Performance Director Richard Holdsworth welcomed the fixtures announcement: “This tour is exactly what we have been pushing for in recent times, where the national team plays across all three formats over a 4-5 week period, just like the full members have been doing for years.

“Both sides are aspiring to become Test countries and to organise bilateral tours on a regular basis in series with context rather than focusing mainly on tournament cricket.

“These matches will not only be part of the pathway to Test cricket for both countries, but also part of the World Cup qualification pathway.  We know the Afghanistan Cricket Board shares our views and we look forward to the series being as highly competitive as the recently-completed ODI series in Ireland.”

The CEO of Afghanistan Cricket Shafiq Stanikzai looked forward to the arrival of the Irish squad saying: “We are really looking forward to hosting the Irish team. This will be a great contest between well-suited teams, continuing their close rivalry, and will also count towards qualification for the Cricket World Cup in 2019.”