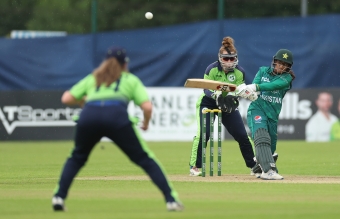 The two sides met in a T20I at Bready in July

Ireland Women fly to Lahore this week for the first tour of that beautiful country by an Irish cricket team. Laura Delany’s squad will play three ICC Women’s Championship matches between 4-9 November, followed by three T20Is from 12-16 November.

The games will be played at the Gaddafi Stadium in Lahore. This Test match venue has a fascinating Irish connection - Lawrence Gardens, a huge complex of gardens and sports grounds including the first venue for international cricket in Lahore, was named after John Lawrence, an Ulsterman who served as Viceroy from 1864-69, when the region was part of British India. The gardens are now known as Bagh-i-Jinnah and Lawrence’s statue, which once stood in the gardens, now stands at Foyle and Londonderry College.

The tour deepens an already warm relationship between the two nations. When both Ireland women and men made their debuts in Test cricket, Pakistan provided the opposition on each occasion. Pakistan was quite weak – one player made her debut aged 12 – and struggled in the conditions, being all out for 53 and 86 as Ireland made a match-winning 193-3 declared.

Ireland and Pakistan first met at the 1997 World Cup, when a 182-run win was secured thanks to O’Neill’s amazing figures of 10-5-10-4. But the Asian side advanced in leaps and bounds and Ireland’s last victory was back in 2009.

Pakistan visited Ireland for the fifth time last summer, when sadly the weather ruined the tri-series in Bready. The visitors won a close 14-over game despite a blistering 47 by Gaby Lewis. 
Irish cricket has been blessed for many years to have had a strong Pakistani element among its clubs. Perhaps the first and arguably finest of these players was a man who brought high-class batsmanship to Dublin in the 1980s. Mohammed Afzal Masood – known as Alf – broke many Leinster batting records with Phoenix and later with Ireland.

The Lahore-native was a great friend of Imran Khan when they were growing up, and the Pakistan captain watched closely from mid-off as Alf scored a brilliant 69 for Ireland against Sussex in 1983. After hitting another boundary, he told him: “You have lost none of your talent, you could still play for Pakistan.”

But Alf made his life in Ireland and won 40 caps – his average of 38.8 has been beaten only by Ed Joyce. Later, his countryman Naseer Shoukat from Faisalabad won 11 caps and helped Ireland qualify for the 2007 World Cup.

Since then there have been excellent Pakistani cricketers around Ireland, both as professionals and amateurs, and boys and girls of Pakistani heritage have started to break into the provincial underage sides.

But the traffic has not all been one way, and at least three Irishmen played first-class cricket in what is now Pakistan. They were three of many thousands of Irish soldiers who served the Raj. England’s empire in India was dissolved in 1947 and led to the foundation of the independent states of India, Ceylon (now Sri Lanka), Burma and Pakistan, which included territory which later became Bangladesh.

Richard Blakeney was born in Dalkey, Co Dublin, in 1897, and played two first-class games – one for the Europeans against the touring MCC side in Karachi in 1926, and later for Sindh v Northern India.

William Cullen was better known as a rugby player with Monkstown, winning one cap as centre against England in 1920. He played in the annual tournament for the Lahore Europeans against sides representing Hindus, Muslims, Parsees and ‘The Rest’. Mahatma Gandhi objected to these competitions as he said they encouraged sectarian tension among followers.

The third Irishman to shine on Pakistani soil was the only one to play cricket for Ireland and was a cousin of the playwright George Bernard Shaw. Freddie Shaw, born in Terenure in 1892, was actually better known in Ireland as an athlete, winning the national championships at 100 and 220 yards. As a student in Trinity, he won two Ireland caps before the first world war. He played for Lahore Europeans at Lawrence Gardens in 1922, taking 7-30 and 7-53 in the tournament final against the Muslims.

Ireland’s men have played Pakistan 12 times since they first hosted them in College Park in 1962.

The most famous game was undoubtedly the one stage in Sabina Park, Jamaica on St Patrick’s Day 2007. It saw Ireland overturn the odds and dump Pakistan out of the World Cup, qualify for the Super Eights stage and spark a growth in the game that culminated in full membership of the ICC in 2017 and that maiden Test the following May. 
That World Cup ‘07 game remains Ireland’s only win, although there was a thrilling tie at Castle Avenue in 2013 which also saw Kevin O’Brien undefeated at the end.

There have been many memorable games played between the men and women of Ireland and Pakistan, so here’s hoping for a few more when they meet in the Gaddafi Stadium.

* Gerard Siggins writes about cricket in the Sunday Independent