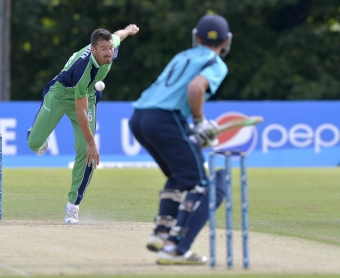 The ICC Cricket World Cup 2015 will be staged in Australia and New Zealand from 14 February to 29 March, and Ireland will be making its third consecutive appearance at cricket’s pinnacle ODI event, having played in the 2007 and 2011 editions, while Scotland is also preparing for its third appearance, having played in the 1999 and 2007 tournaments.

With only five months to go to the ICC Cricket World Cup 2015, both sides will have one eye on the once-in-a-lifetime event while also aiming for victory and regional pride in the series.

The rivalry between the neighbours extends back to 1888 when they met for the first time, and in the intervening 126 years, they’ve played each other in 12 ODIs, most recently in two ODIs in the final round of the Pepsi ICC World Cricket League Championship in September 2013, with Ireland winning both encounters.

Ireland skipper Kevin O’Brien believed the series is critical preparation as his side focuses its attention on the ICC Cricket World Cup 2015.

“The players all know just how important this series is in terms of World Cup preparation, and the fact that it’s Scotland gives it an extra edge,” said O’Brien, who famously holds the record for the quickest ICC Cricket World Cup century after scoring 113 from 63 deliveries to lead his side to a heart-stopping three-wicket victory over England in 2011.

That performance also helped Ireland record the highest successful ICC Cricket World Cup run-chase to date, and the 30-year old all-rounder is confident that Ireland can continue its winning ways: “It’ll be a tough series with so much at stake in terms of players making their claims for a World Cup place. We’ve proven ourselves time and time again against our fellow Associates over the past decade, so we’ll be keen to reassert ourselves again.”

Scotland head coach and former New Zealand all-rounder Grant Bradburn said the series is vital preparation for his side: “These games pose another big opportunity for these players to enhance their chances of making the plane to the World Cup in 2015.

“I’m looking forward to rubbing shoulders with our celtic cousins, and relishing the chance to experience a rivalry, which I’m told, is quite intense. It’ll be another chance for our players to perform in a high pressure environment,” he said.

The ICC Cricket World Cup trophy will arrive in Ireland on 9 September, and will be displayed at the second ODI at Malahide the following day.

On the day of arrival, the trophy will tour iconic Dublin locations, including the world famous Ha’Penny Bridge, Malahide Castle, Molly Malone and the Dublin Spire.

Following on from the series, Ireland and Scotland will travel to Australia and New Zealand as part of the ICC’s High Performance Programme (HPP).  Along with fellow qualifiers Afghanistan and the United Arab Emirates, the two sides will play a total 29 of matches against state and regional teams as part of their preparations for cricket’s pinnacle 50-over tournament.

Ireland will commence its ICC Cricket World Cup 2015 campaign against West Indies at Saxton Oval, Nelson, on 16 February, while Scotland will take on co-host New Zealand at University Oval, Dunedin, on 17 February.

Livestream
All three ODIs will be streamed live, and can be watched on www.cricketireland.ie.

Tickets for the Scotland series are still available on www.cricketireland.ie and Ticket Master outlets nationwide.

An adult ticket costs €10, with Senior Citizens costing €8. Entry for under 16’s is free, while there is a three match special offer priced at only €20.