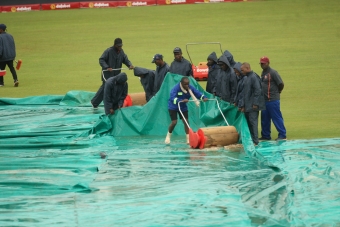 HARARE - Ireland had to settle for a series draw against Zimbabwe, with rain coming soon after the start of the third ODI between the sides and refusing to relent.

Zimbabwe won the toss and elected to bat, with Ireland making one change. Andy McBrine sat out with an injured finger, Gareth Delany replacing him in the XI.

Mark Adair was the pick of the bowlers early on. Josh Little and Graham Hume asked questions with the new ball, but also offered Zimbabwe the chance to find the boundary regularly, with Little also handed a warning by the umpires for running on the pitch in his follow-through.

Adair was introduced for the seventh over of the innings, with Paul Stirling - leading Ireland in his 350th appearance in the absence of Andrew Balbirnie - sensing a change of approach was needed. The move brought instant reward as Stirling’s plan working perfectly. After three dot balls, Chamu Chibhabha attempted to drive and could only chip to Murray Commins close in and straight on the off-side, placed for the stroke.

Craig Ervine, rested for the second game, came back into the side with the series on the line. He flicked for four second ball to break the maiden, But Ireland stemmed the flow of boundaries thereafter - Zimbabwe found the rope five times in the first six overs, but that Ervine punch was the only four in the next seven overs.

Adair continued to threaten, with a huge lbw appeal in the first over after the powerplay and a swish and a miss from Ervine in the following over, both unreviewed. However, the rain came with Zimbabwe 55-1 and Curtis Campher - playing his 50th game for Ireland - about to begin his second over.

While there was hope at one point for a restart, with some of the covers peeled off and the umpires undertaking an inspection without umbrellas, the wet weather soon returned.

Ireland end a closely contested tour with a share of the spoils in ODIs and having succumbed to a 2-1 defeat in the T20I series. They are next in action against Bangladesh in March.