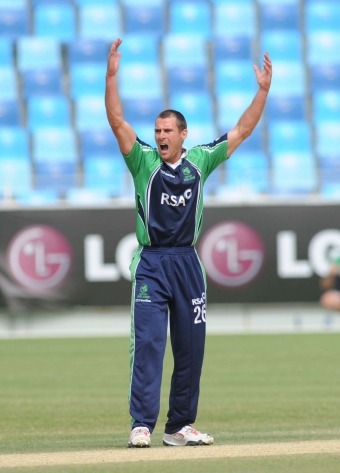 Max Sorensen moves to an A contract for 2013

Max Sorensen and an exciting quartet of youngsters are the major beneficiaries of the 17 contracts announced by Cricket Ireland for the 2013 season, with a further five contracts to be offered in due course.

Sorensen 27, has been rewarded with an ‘A’ contract after impressing with his consistency, speed and accuracy during an outstanding 2012 season. The Hills opening bowler joins established stars Trent Johnston, John Mooney, Alex Cusack and Kevin O’Brien in the top bracket of deals.

There are now four categories of contracts, with the ‘C’  band dedicated to players who are in full-time education, headed by Stuart Thompson, who is already a full international.

Promising pace bowler Peter Chase and the Cricket Ireland Young Player of the Year Tyrone Kane both earn contracts for the first time as Ireland look to the future following the recent retirements of Boyd Rankin, Nigel Jones and Albert van der Merwe.

Cricket Ireland Performance Director Richard Holdsworth said: “We are pleased to retain players on ‘A’ and ‘B’ category contracts from last year, and all of them still have a great deal to achieve on the international stage.

“It is important Cricket Ireland has plans for the future, and whilst 2013 will be a huge year for the team, we must also look ahead to major ICC events – the World Twenty20 in 2014 and the World Cup in Australia and New Zealand the following year.

“We have therefore awarded a full ‘A’ contract to Max Sorensen who impressed everyone in 2012, taking 31 wickets at just 17 runs each in the 21 games he played.

“We have also awarded ‘C’ category contracts to four younger players who we see as a key part of our future. Nine of the 17 contracted players are also contracted to English counties, and our close relationships with those counties will hopefully allow them to play for Ireland as much as possible in addition to the ICC mandatory matches in season.  In due course we shall be offering an additional five ‘D’ contracts to players who we feel have long-term potential, and these will be announced in time.

“The new Inter-Provincial series of 3-day, one-day and Twenty20 formats to commence in late April, will give players not contracted to English counties a much higher standard of cricket and the opportunity to impress the national selectors, national coach and support staff.”

Commenting on the contracts, Phil Simmons National Coach said: “There’s no doubt that a key part of our success to date has been the move to professionalism. We will now have 22 players on full or part-time contracts and a structure supporting the senior squad.

“It makes such a difference as a coach to be able to work with players on a regular basis and this has been reflected in our dominance at Associate level over the past five of six years.

“The composition of the contracted players is an indication of what I strive for in my teams. There is the spine of experience as well as a number of very talented youngsters. While immediate results are paramount, it’s always good to be thinking ahead and these contracts offer the younger guys some security as they look to build their careers.

“As with any squad, there are bound to be a few players who are disappointed to miss out on a contract offer. With the new Inter-Provincial Series coming on track, they will all have the chance to prove me wrong, and the door remains open for additional contracts.”

For Thompson, a 21-year-old second-year Geography student at Northumbria University in Newcastle, the awarding of a contract is an important stepping stone as he looks to build a career with the international side.

He said: “I’m obviously delighted to get a contract - it’s another step in the right direction for me personally. It’s fantastic to have added responsibility, and I hope it opens up more opportunities to play for the national side.

“Cricket Ireland have a number of exciting and quality fixtures this year, including the inter-provincials throughout the summer, so I’m hoping to play - and more importantly perform - in as many of those fixtures as I can.”