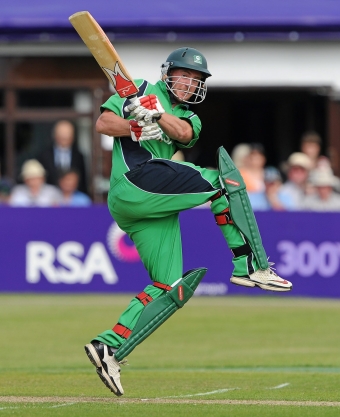 John Mooney misses out due to injury

John Mooney misses the ICC World Twenty20 finals in Sri Lanka after suffering a serious finger injury which will rule him out of action for 3 months.

John Mooney misses the ICC World Twenty20 finals in Sri Lanka after suffering a serious finger injury which will rule him out of action for 3 months.

Ireland coach Phil Simmons agrees it’s a serious blow for both the player and Ireland as the squad for Sri Lanka was announced: “It’s disappointing for both John (Mooney) and the team. He’s suffered two finger injuries and this latest one won’t heal in time for the start of the tournament. He’s been a major part of the team for the last 3 or 4 years and it’s disappointing we have to go without him.

“This will give others other an opportunity to push for his place and stake a claim. We have guys who can come in and fill the spot and if selected can hopefully fill the role of John Mooney .”

For Limavady all-rounder Stuart Thompson, inclusion is the squad is a belated birthday present as he turned 21 this week, and Simmons feels it’s a great opportunity for him: “He’s done well at A team level and in the few senior games he’s played this year. It’s up to him to push and cement his place in the squad.”

Simmons has named an experienced squad with six having played in the final stages of all Ireland’s five major tournaments. Indeed only Tim Murtagh, Max Sorensen and Stuart Thompson haven’t been named in a previous World Cup or ICC World Twenty squad.

Simmons said of the experienced composition of the squad: “That for me is the good thing. Everybody has been there before and knows what’s expected of them. It’s good for the younger players who will learn how we do things and how we proceed at tournaments.”

Ireland are in Group B of the competition playing Australia on September 19, and West Indies on September 24 - both games take place in Colombo.