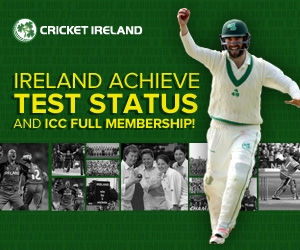 Irish cricket has received a tremendous boost after receiving confirmation from ICC of their successful application to be awarded Full Membership and Test status.

The historic decision was taken at the ICC Conference at the Oval in London today where both Ireland and Afghanistan were confirmed as the 11th and 12th Full Member countries in the top echelons of world cricket.

The news was welcomed by Cricket Ireland CEO Warren Deutrom, who along with his team has worked tirelessly over the past decade for Ireland’s elevation.

“It’s fantastic news for all involved with Irish cricket and I’d like to thank ICC and the members for the positive outcome,” said a clearly delighted Deutrom. “It’s obviously a great fillip for the game in Ireland, where we are striving to make Ireland not only a major nation in cricket, but also to make cricket a major mainstream sport in the country.

“Test cricket is the pinnacle of the sport and it’s what we’ve all been aiming for. The players have been very clear in their stated objective of wanting to play at the very highest level of the game and it’s clearly a momentous day that we will be able to do that in the very near future,” added Deutrom.

“The sport has grown substantially since 2007, with participation levels quadrupling in that time. With the increased profile and revenue streams that will come with achieving Full Membership, this can only get even better as we invest in the sport throughout the country.

“I’d like to thank all those involved with Irish cricket for their drive, enthusiasm and energy over the years which has made this journey an ultimately successful one. We are all justifiably very proud today, but we see this not as the end of the road, but just the first step in taking our wonderful sport further and higher in the years ahead.”

Ireland captain William Porterfield is relishing the opportunity to lead Ireland in a Test match, which he admits would be ‘a bit special’. “It’s wonderful news for all of Irish cricket, with all the players already talking about playing in a Test match for the first time,” said Porterfield.

“We’ve all played in World Cups and achieved some memorable results along the way, but to play in a Test would be a bit special. You dream as a youngster growing up of playing at the highest level and for me the opportunity to lead Ireland in their first Test match would be an incredible experience.”

Cricket Ireland Chairman Ross McCollum outlined the next steps and the immediate future for Irish cricket.

“We are sincerely grateful to the ICC and its members for giving us this honour. It is a recognition of the quality of our teams over the years, male and female, of our talented administration, and of the strength of our domestic and club structures.

“It is also clearly a sign of the faith that the cricket community has in Ireland’s ability to help grow the global cricket economy through more people attending, watching or investing in our great sport.

“We can now commence discussions with several parties about staging our first Test while we look forward to the outcome of discussions around international cricket structures which will help us unlock increased commercial funding to assist in the development of the game.

“With Full Membership comes increased funding and we will look to invest that in all levels of Irish cricket. The Board of Cricket Ireland has already debated next steps for Irish cricket at a high level around strategy and immediate priorities.

“At this stage, it is unclear at what point increased funding will begin to flow down from ICC, but we shall get into that level of detail in due course.

“I’ve no doubt this date will be seen as a watershed moment for the sport, and I’d like to thank ICC once again for having the courage and foresight to broaden the game’s traditional horizons which can only be good for the sport.”

In attendance will be Cricket Ireland CEO Warren Deutrom along with members of the Irish cricket teams (subject to availability), and Brendan Griffin,  the recently-appointed Minister of State for Tourism and Sport.

There will be a formal presentation, plus one-to-one interview opportunities for all media.