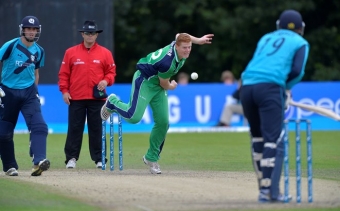 Ireland completed back-to-back victories over traditional rivals Scotland as they romped to a seven wickets win on Sunday, to follow up their thrilling last over conquest of their Celtic cousins on Friday.

Tim Murtagh’s last over blitz had crushed the Scots hopes of automatic World Cup qualification and they appeared to have suffered an emotional hangover as they turned in a largely lethargic display yesterday.

Stuart Thompson (2-20) took the new ball on his ODI debut, and the Eglinton man impressed as part of the Irish seam bowling quartet who shared the wickets among themselves.

Kevin O’Brien (3-31) and Max Sorensen (3-36) took three wickets apiece, while Eddie Richardson (2-39) collected his first international wickets. While spinners George Dockrell and Paul Stirling didn’t take any wickets, their parsimonious spells kept the Scots in a vice-like grip. Indeed, the Irish only conceded four bolwing extras, and the Scots managed only 12 boundaries in the innings.

Scotland’s tactics led to much head scratching from the assembled crowd, lacking any intenstity or urgency throughout. Six batsmen got starts but much to skipper Mommsen’s chagrin, none kicked on to produce the substantial score needed to set Ireland a remotely challenging total.

Calum MacLeod (39) and Richie Berrington (35) rebuilt the innings with a 66 run stand, after Scotland had been reduced to 61 for 4.

However the partnership occupied over 20 overs, with no boundaries coming for 16 overs as the Irish attack strangled the life out of the innings.

David Murphy (20*) hit a few lusty blows but it was too little, too late as the Scots managed just 165 all out with three balls unused.

Iain Wardlaw (2-60) offered some optimism for the visitors, removing William Porterfield (5) and Paul Stirling (13) early on, but it was to prove a false dawn.

Niall O’Brien hit an unbeaten 65 from 70 balls (9 fours) to lead Ireland to a comprehensive seven wicket win. The Leicestershire opener shared stands of 69 with Ed Joyce (39), and 75 with Gary Wilson (35*) as the win was achieved with 17 overs to spare.

Ireland were presented with the trophy by ICC Global Development Manager Tim Anderson, finishing five points clear of their nearest challengers, having only suffered defeat once in 14 matches - to Kenya in the sweltering conditions of Mombasa. Ireland coach Phil Simmons was naturally delighted at the wide margin of the win saying: “We played proper cricket today, and it just shows us how much we let ourselves down on Friday. So it’s a case of we coming back and making sure we play properly, and not having days like that too much.”

Simmons was especially pleased with the performance of his young bowling attack: “It’s nice to be able to bring in young Thompson and Eddie Richardson, and for them to perform the way they did with Max (Sorensen) and (George) Dockrell, and show that we have a little bit of depth in the bowling.”

The teams square up again in the ICC InterContinental Cup on Wednesday at Clontarf (10:30am).